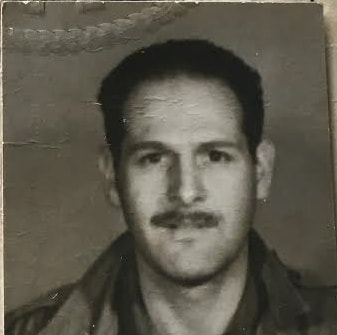 Jacob Goldberg was born on September 25, 1914 in Chester, PA. He was the second of four children born to two Russian-born parents who had emigrated to the US only four years before his birth.

By the time Jacob registered for the draft, on October 15, 1940, the family was living in Trenton, NJ. Jacob had done a year in high school, and was working for Drake Bakeries in Newark, possibly as a driver. When he enlisted, on March 10, 1942, his profession was listed in the category of "semi-skilled chauffeurs and drivers."

He served in the Ghost Army as a medic, and was awarded the Bronze Star for Heroism on the Ghost Army's deadliest day, March 15, 1945. The citation read: “When an enemy artillery shell exploded in the midst of a group of officers and men, wounding fifteen, he calmly and efficiently administered expert treatment to them while enemy shells continued to fall in the area. His admirable efforts resulted in the saving of the leg and probably the life of one man, and assured the recovery of the remainder of the wounded.”

Jacob was discharged from the Army on September 19, 1945, and made his way back to Trenton. He married Miriam Rosenberg in 1949, and they would go on to have two daughters: Sharen and Linda. Jacob lived in Trenton and Ewing most of his life; prior to retirement he worked as a traffic investigator for the New Jersey Department of Transportation. He was a member of Ahavath Israel Congregation and a founding member of Herzel Zion Hebrew School.