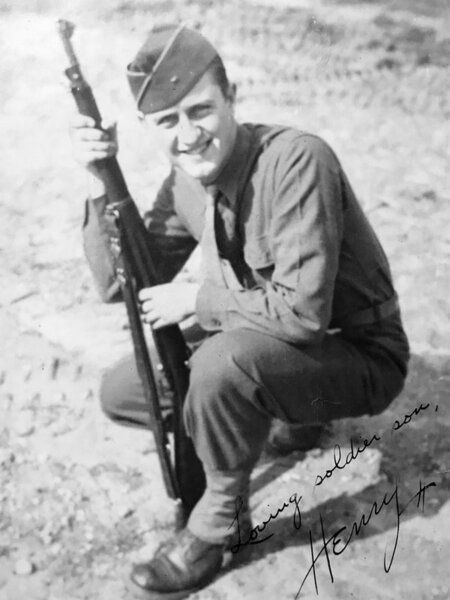 Hank Gallucci was born on December 20, 1923, in Brooklyn, NY. He was the older of two children; his parents were both immigrants from Italy.

After graduating from high school, he attended The Art Career School in NYC, an institution designed to educate its students in illustration, cartooning, and commercial and advertising art.

He registered for the draft on June 30, 1942, and enlisted on December 8, 1942. Like many Ghost Army soldiers, he was recruited from his art school. He was discharged from the Army in 1945 with the rank of CPL, and completed his art studies.

Hank spent his career as an art director for various advertising firms in New York City. He and his wife, Rose Sofia, were the parents of three children: Christine, Robert, and Paul. The family lived in Brooklyn until 1968, and then moved to Yorktown Heights, NY. Later residences included Fishkill, NY and Jefferson Valley, NY, and in his last years he resided at the Waterview Nursing Home in Purdys, NY.

He was active in his Catholic parish in various capacities; later in his life he became a lay minister. He also served as a Boy Scout leader during his son Robert's tenure in the Boy Scouts.

Hank enjoyed singing and playing the bass fiddle. He also created artwork for his family and community. One piece, a flag commemorating the 9/11 attack, is displayed in Memorial Hall at the World Trade Center Museum. It consists of 9 red and white stripes and 11 stars, along with the Roman numerals for 9 and 11 (IX and XI), and the two columns of the twin towers. The flag is fully symmetrical--it reads the same whether or not the design is reversed. Hank said that he used the colors of the American flag--but a different blue, "the clear blue of the sky that morning." His cousin, Wally Travers, had worked at Cantor Fitzgerald in the twin towers, and died in the conflagration.

2016 His story in the Eastwick Press (Eastern Rensselaer County, NY)

2016 "Veteran of the Day" at US Dept. of Veterans Affairs website