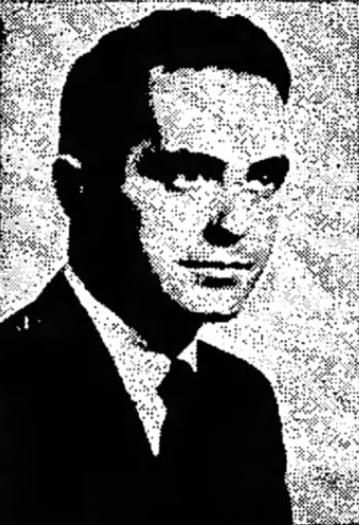 George Gallipeau was born in Newport, RI on March 18, 1924, the oldest of four sons. His father was not a Rhode Islander, but had sought a career in the Navy and was stationed in Newport. This circumstance found George's mother and her four small sons living with her parents in the 1930 census, and traveling back to New York from the Canal Zone (visiting their father? or perhaps they had all been living there?) a few years later. By 1935 they were living at the Naval Training Station in Newport, where George Sr. served as Chief Commissary Steward. George's mother was also active as a Navy wife--she served as President of the Navy Wives' Club there in 1941.

George graduated from Rogers High School in Newport in 1942, and registered for the draft a few weeks later.

In September, 1942, George's father was recalled to active military service. In May 1942 the new Sampson Naval Training Base in Seneca County, NY had been announced, and George's father was transferred there sometime later in 1942 or early in 1943. George was living there when he enlisted on July 12, 1943.

George's younger brother Joseph also served in WW2--he was in the Philippines with the Navy in 1942.

A local newspaper article from June 23, 1944 describes George's safe arrival in England.  He was discharged from the Army with the rank of Tec 5.

After the war, George went back to school, graduating from Rhode Island College with a BS in 1950. He married Beatrice "Betty" Dennis the same year and they relocated to Barrington, RI where George had obtained a teaching job. He also became the Assistant Supervisor of Audio-Visual Education for the state of RI the following year.

George and Betty would go on to have three children in the 1950s: George III, Dennis Michael, and Mary.

George also continued to use his WW2 radio company training as an active ham radio operator. In 1951, as a member of the Radio Amateur Emergency Corps, he was named assistant coordinator for Barrington through the American Radio Relay League, helping to connect Barrington ham operators with state and national networks.

He was proud of his ham operator credentials--seeking his ham ID as a license plate--W1VEM.

He taught science (and specifically physics) in Barrington, and throughout the 1950s he took on more responsibilities for science education in that community and in the wider state and national contexts. In the summer of 1955 he received a research assistantship at MIT in Cambridge, MA through the National Science Teachers' Association.

He was also active in the Boy Scouts, as his father had been, serving as a member of the Bristol County Committee in 1953.

He chaired the Barrington High School Science Fair in 1959 (and likely other years as well). That same year he was one of 12 teachers picked for a year's free study at Brown University under the auspices of the Academic Year Institute for High School Teachers of Science and Math.

He earned an MS in Teaching at Union College in Schenectady, NY in 1964, and took on statewide responsibilities in the following years as a member of the RI Schools' Science Fair Committee. He was also the RI representative for the annual science talent search for Westinghouse Science Scholarships.

By 1968 he had taken a job as chair of the science department at Portsmouth (RI) High School.

George retired to Naples, FL (likely with a second wife named Barbara) and was active in retirement there--as a ham radio operator, a judge for the American Orchid Society, and as a parishioner at St. Peter the Apostle Catholic Church.

1944 article from Newport Mercury about his military service

1951 article from Newport Daily News re his school work

1959 article from Newport Daily News re his being selected to study at Brown U. for a year

1959 article from Providence Journal; he is chairman of Barrington HS Science Fair

1968 article in Newport Daily News re his job as chair of Portsmouth HS Science Dept.