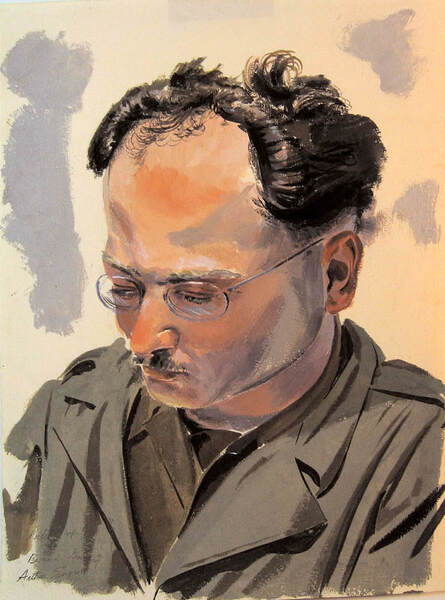 Occupation before the war: shipping and receiving clerks

Barney Greenberg was born in New York City on November 30 or December 31, 1914* of Russian immigrant parents; he was the fourth of five children. The family lived in a tenement on the Lower East Side; Barney's father was a tinsmith.

At some point the family moved to Brooklyn, and Barney attended the Hebrew Free School of Brownsville (a Brooklyn neighborhood), from which he graduated in 1928. The authors of America in Still Life: Barnett Greenberg say that was the end of his formal education, although his 1942 enlistment record reports that he had four years of high school. In any case, by the time he registered for the draft on October 16, 1940, he was working in the garment industry, at Columbia Ideal Quilting Company in Long Island City.

Barney enlisted on April 29, 1942, and married his sweetheart, Kate Lachs, a little over a month later. (She was working as a salesperson in her father's sweater manufacturing business.) As an artist, he found his way into the 603rd Engineer Camouflage Battalion.

A 1954 article about his painting says that he "always carried a watercolor box with him during three and a half years in the Army during World War II." And, like his fellow artists, he produced paintings and sketches of his time in the Ghost Army, including watercolors of villages and sketches of his fellow soldiers. Army buddy Art Singer and Barney painted each other in December, 1944; in a letter home Art wrote: "Tonight I worked on Barney Greenberg and he worked on me. I did a portrait in tempera colors that is Barney. I like it and I feel it was a worthwhile evening. You'll get it in your next package along with a bunch of Harry Gottesman. Then, you can invite their wives over and show them to them. They will probably tear them apart . . . but they are good likenesses."

After the war, he spent several years working in Kate's family's knitwear business, but eventually chose to get a job outside of the family and went to work at the US Postal Service. His title at the Brooklyn Post Office was clerk, but the work he did was art—lettering, wall murals, holiday signs. He won several awards for his Postal Service work, ending his career there as Head Sign Painter in Office Services, Engineering and Drafting Unit.

He continued to paint throughout his life—sticking with an illustrative, representational style. He occasionally showed his work—a 1954 newspaper article describes an exhibition of his watercolors at the Brooklyn Public Library. But he primarily painted for himself and his personal circle. He also created customized cards for family and friends to commemorate birthdays, weddings, bar mitzvahs, and graduations.

In 1979, Barney retired and he and Kate moved to Deerfield Beach, FL where they established themselves in the local Jewish community.

Barney was not interested in selling his work, but gave art to churches, synagogues, libraries, and community centers. He also donated many pieces to be sold at fundraising auctions.

He died on September 9, 2007 and is buried with Kate at Star of David Memorial Gardens, North Lauderdale, FL.

*NOTE re his birth date: Four of the sources listed below provide a birth date for Barney--two of them the December 31 date (draft card and Social Security applications and claim index) and two the November 30 date (Social Security death index and America in Still Life.) Interestingly, the two Social Security records agree on his SS# and death date but have different birth dates!

1954 article in Brooklyn Daily Eagle (NY) about his art