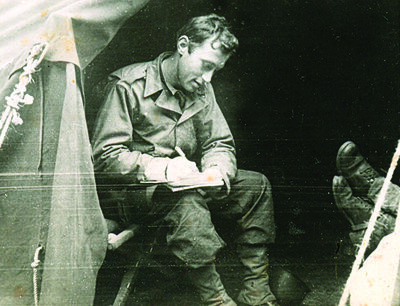 Arthur Singer was born on December 4, 1917, in New York City.  As a very young man, he would take the subway to the Bronx Zoo where he first fell in love with drawing wildlife. His New York Times obituary says that he "had a passion for jazz, and friends recall his forays into Harlem in the 1930s to hear the best jazz musicians and learn the latest dances." While still in high school, he became friendly with Cab Calloway and Duke Ellington, and did portraits of both of them formed out of the names of the songs they recorded. These friendships lasted for years; in the 1950s Ellington asked Art to design a number of album covers.

Art enlisted in the Army in 1942. After basic training, he was assigned to a combat unit. "As the unit was staging for deployment to Europe, a chance encounter changed the course of his life. The commanding general happened to see Private Singer painting a watercolor in his spare time and was impressed enough to recommend his transfer to the 603rd." He had made over 150 watercolors and pen and ink drawings during his time in Europe. After that, Art worked in the advertising business, as an illustrator and designer. But he eventually wanted to become a wildlife artist, and started moonlighting as one. In 1958 he was able to realize his dream, and became a full-time bird painter. During his career, Art illustrated more than 20 books, including Birds of the World and Birds of North America. Birds of the World was his first book of illustrations, and included 300 illustrations of more than 700 bird species; it sold more than a half million copies.

During his career, Art painted every species of bird in the United States, Europe, and the West Indies. His work is housed at the American Museum of Natural History and the Smithsonian, as well as in other museums and in a number of private collections (including those of Prince Philip and the King of Sweden). Art died of esophageal cancer at his home in Jericho, NY on April 6, 1990.

If you are interested in learning more about the Singer collection, or quoting from these letters in your research, contact office@ghostarmy.org.

portrait of a man in a suit