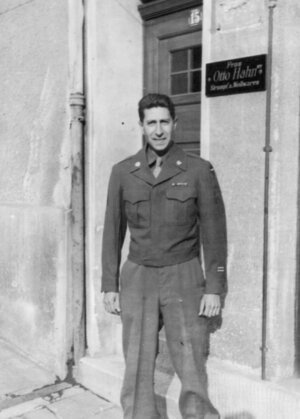 Theodore Katz was born in Syracuse, New York on March 22, 1914. His parents were both born in Russia, and he was the oldest of two sons.

He graduated from the College of Fine Arts at Syracuse University in 1938, and worked as an artist after graduation. At the same time he was playing the piano in jazz and swing groups. After the war he returned to Syracuse and married his fiancee Helen on December 2, 1945. They had one son, Richard.

Ted practiced both his art and his music after the war. He worked in at least two advertising agencies in Syracuse; by 1970 he was the Art Director at Chapman-Nowak Associates, and later he was Art Director at Conklin, Labbs, & Bebe, from which position he retired. Ted died on April 23, 1991, and is buried at Beth El Cemetery in Syracuse.

Training in the USA

Marlene Dietrich at a microphone

Back in the USA