The GIBBONS sailed up the Bristol Channel 15 May without incident, completing her transatlantic crossing in a little over three times the "BLUE RIBBON" record: 13 days. During the night before debarkation, enemy planes bombed Bristol and many people thought themselves the target. There were no casualties among the 23rd.

Col. Reeder and some members of the advance party met the boat at the dock. They brought word that the first bivouac area was located near Stratford-on-Avon in the lovely green midlands. It took seven hours to get to it on the LM&SR (London Midland and Southern RR). The CP was a dark rambling Victorian chateau called "Walton Hall." The owner, old Lady Morduant, lived off by herself in a wing. The grounds included velvet lawns, tailored forests, and a swan lake. The troops lived in Nissen huts and referred to the big house as "the castle." Headquarters called it "Mouldy Manor."

The priority job now was supply and the "4" section immediately set about procuring the unit’s T/E equipment. It was scattered in huge storehouses throughout southern England. As soon as vehicles were secured, the Sig Co Sp began installing its specially mounted radios. At the same time, the Cam Engrs were checking and repairing their dummy equipment at Ramsgate (vic Canterbury). Training by all units was continued with considerable emphasis on athletics and recreation. The pass policy was liberalized in view of the fact that no leaves or furloughs had been granted prior to coming over. Some men attended the superb plays staged by the Shakespeare Memorial Theatre in Stratford-on-Avon, but most seemed to prefer the more realistic pleasures of Leamington Spa. The passees that went as far as Coventry got their first glimpse of a long dreary succession of war-devastated cities. Liquor was hard to get but the women were unbelievably friendly. Two very colorful parties were held in the Manor House. At the first one, Capt. Gerald N. Wagner, Dental Surgeon, lost all the brass buttons on his Class A blouse. 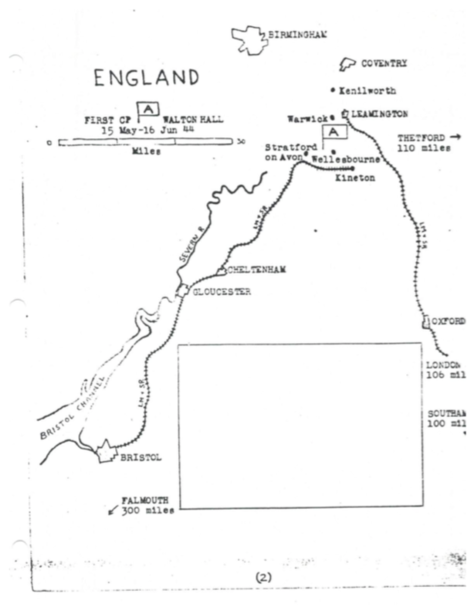