In this position the 23rd set up its Special Service tent and waited for the next mission. The Signal Co Sp did some SIAM (Staff Information and Monitoring) for 12th Army Group and took a little credit for speeding up the air delivery of gasoline to the 4th Armored Division. Optimism was widespread. The first Naafi liquor ration was distributed and lots of people thought Paris would be liberated soon.

A week later, the 23rd was alerted for one of it most geographical operations (BRITTANY 9-12 Aug 44). It involved four notional task forces streaming into the Brittany peninsula. The objective was to stop the withdrawal of enemy units (SEVENTH German Army) from the Normandy pocket by creating the impression that the United States Army was weakening its forces in front of the main battle position and turning to clear the Brittany peninsula prior to a major push into France. The Germans did not withdraw. In fact they counterattacked to cut the FIRST and THIRD ARMIES at Mortain 7 August, but this was two days before the 23rd went into action. By 19 Aug they were bottled up and destroyed when the bloody Falaise-Argentan gap was closed. See map. 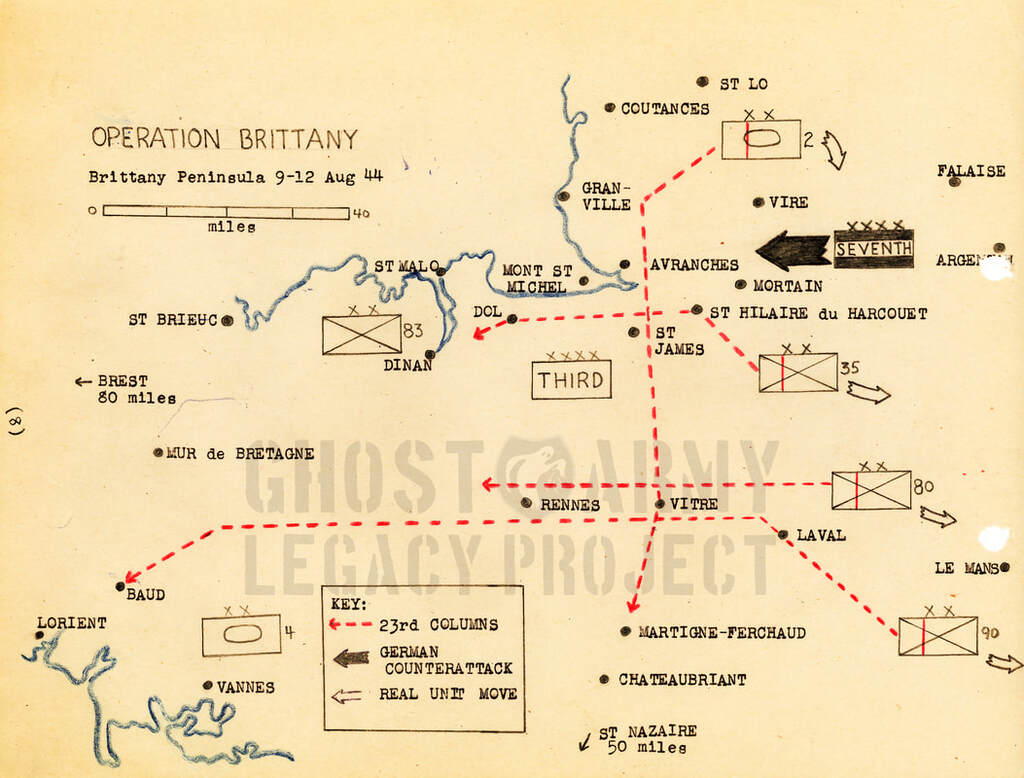 The 23rd was divided into four task forces. Each was supposed to simulate one column of combat team-size of four different divisions: 35th, 80th and 90th Infantry Divisions and the 2nd Armored Division. They assembled in the approximate areas of their respective divisions and then turned west or south while the real divisions kept traveling east. If the German G-2 received the picture the 23rd was trying to present, he would think that THIRD ARMY was detaching RCTs from four divisions to clean up Brittany.

The deception was done mostly with Special Effects and Radio. Each column was complete with signs, bumpers and shoulder patches. The visual display was excellent. If the 23rd did not fool the Germans, it certainly misled civilians and the rest of the Army. There were many tales of personnel from the real divisions getting mixed up with the phony columns. A powerful spook radio net including all the columns was directed from the THIRD ARMY CP where the command of the 23rd was located. Two liaison officers got through to Brest and Vannes. Their mission was to establish radio contact with the approaching notional columns. At Brest with the 6th Armd Div, Lt. Col Frederick E. Day was also instrumental in the capture of about 300 Germans and a good store of Wehrmacht chocolate. Capt. Edward M. Cowardin did not find anything but the 4th Armd Div in Vannes.

While the 23rd does not hold itself responsible for the destruction of the German SEVENTH ARMY, there is always a possibility that its ruse helped becloud the German estimate of the situation. The enemy G-s, however, must have been fairly confused as it was.