Normandy in June and July was not unpleasant for the 23rd. The bivouac areas of Ecrammeville and Rubercy looked like picnic grounds. The only disturbance was the nightly demonstration by the anti-aircraft artillery. That was terrific. Most everyone dug foxholes but they were not necessary. Diggers gave sheepish answers as to why they dug: "It makes my pup tent roomier…I like a smooth bottom for my bedroll," etc. Tourists revisited Utah and Omaha beaches and wondered at the astonishing job that was being done there. Small bands occasionally went rubber-necking along the front lines. One group nearly got themselves decorated by being the first in St. Lo after they had read in the STARS and STRIPES that the town had been taken. The news was a little premature.

The main job was reconnaissance: SIGNAL reconnaissance which enabled the 23rd to build up an unequalled library of combat SOPs, SOIs and radio peculiarities. This was to prove invaluable in deception planning. Nearly every corps and division within the 12th Army Group was contacted. VISUAL reconnaissance by the 603rd Cam Engrs was just as extensive. They were interested in studying unit "atmosphere" and collecting material for the new "Special Effects" section. Soon they had copies or specifications for every corps and divisional shoulder patch, bumper marking and CP sign. They could duplicate the appearance of any U.S. unit in the 12th Army Group. COMMAND reconnaissance followed the same routes as VISUAL and SIGNAL. It was made for two reasons: (1) To acquaint officers with the terrain, combat units and situation, (2) To tell responsible parties about the potentialities of 23rd deception. Naturally, these reconnaissances never ended. New divisions kept coming in and the situation and practices kept changing. By V-E Day the 23rd probably contained the most widely traveled and best-informed officers in the ETO. A majority of the jeeps had driven over 16,000 miles.

ELEPHANT was the only operation in July so the 23rd was not over-worked. Much time was spent looking for jobs but the Normandy build-up simply did not lend itself to deception. At least, no one with sufficient influence thought it did. The 23rd was told to wait for the expected "break-through." With the Germans reeling back toward the Siegfried Line, we could "fight ‘em and feint ‘em" until they were dizzy. So the 23rd waited, trained and reconnoitered. Calvados, a powerful native stimulant, was sampled. Private contracts for laundry were made with local farmwomen who preferred candy, soap and cigarettes to francs. Towns were OFF LIMITS but some visiting was done on various pretexts. One scheme that worked for a long time was to tell the MPs you were looking for blue paint. No Army supply dump carried this color. On 26 July about 2000 Allied bombers passed over to blast an opening in the German lines. The terrible rumble of those bombs could easily be heard in Rubercy and the 23rd knew that it would be on the move.

The unit did not go as far as it thought it was going. The next CP was only 32 miles away. On 3 August, the convoy was routed by way of Periers and the devastation of the "break-through" was everywhere. The roads were lined with blasted vehicles and bloated cows. The bivouac area was another orchard bit it was full of German foxholes and filth. The nearest name-town was Coutances. The nearest headquarters was the huge new 12th Army Group. It looked like the 23rd was going to be attached to them. They gave the unit their APO 655 and changed the code name from ARIZONA to BLARNEY. This sounded like a crack but nothing could be done about it. 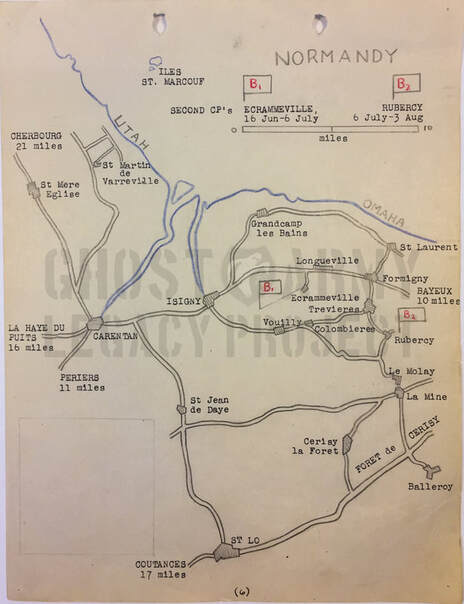 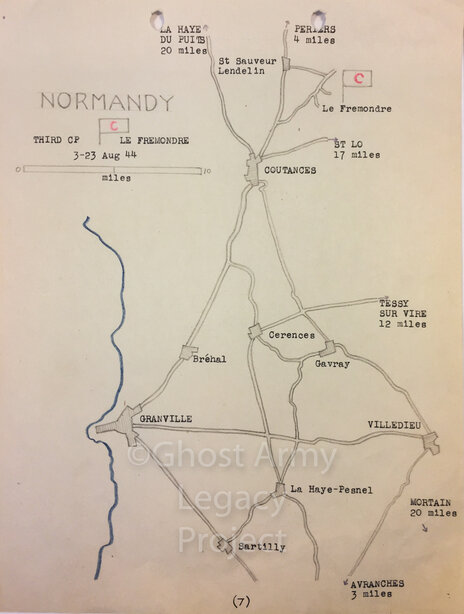