While half of the command was storming Brest, the 23rd headquarters moved deep into France, halfway between Laval and LeMans. Here at long last, the countryside was neat, abundant and apparently untouched by war. The CP was located on the grounds of a charming chateau unfortunately gutted by fire. Twelfth Army Group was 30 miles away. The nearest town was Torcé en Charnie and there were a number of good restaurants in it. Here everyone ate richly and quietly indoors for the first time since the "debarquement." The French cuisine is superb, especially when they have food and this region was the center of the fat Paris Black Market produce.

Torcé was the only town in all Europe that was formally "liberated" by the 23rd. It was an impressive ceremony. There was a crack American color guard from the Sig Co Sp, a band of French firemen, a pretty white column of schoolchildren with flowers and leading citizens. Col Reeder delivered a gallant speech, which ended with a rousing VIVE LA FRANCE! Torcéans were visibly moved and their rendition of "La Marseillaise" was all the more thrilling from four years of silence.

In Torcé, the 23rd tasted its first French onion soup with a floating piece of toast and cheese (au gratin). The Hotel du Commerce in Evron was the best place to get it. The first bottles of Cointreau were obtained here too, and quickly transformed by Maj Joseph P. Kelly into stunning "Sidecars" (1/3 COINTREAU, 1/3 COGNAC, 1/3 LEMON JUICE). Every one stopped throwing away the lemon powder packets in their K ration dinners. On 25 August all units spent a joyous night celebrating the fall of Paris. De Gaulle spoke in Le Mans on his way to the capitol. Franco-American relations had never been so good. 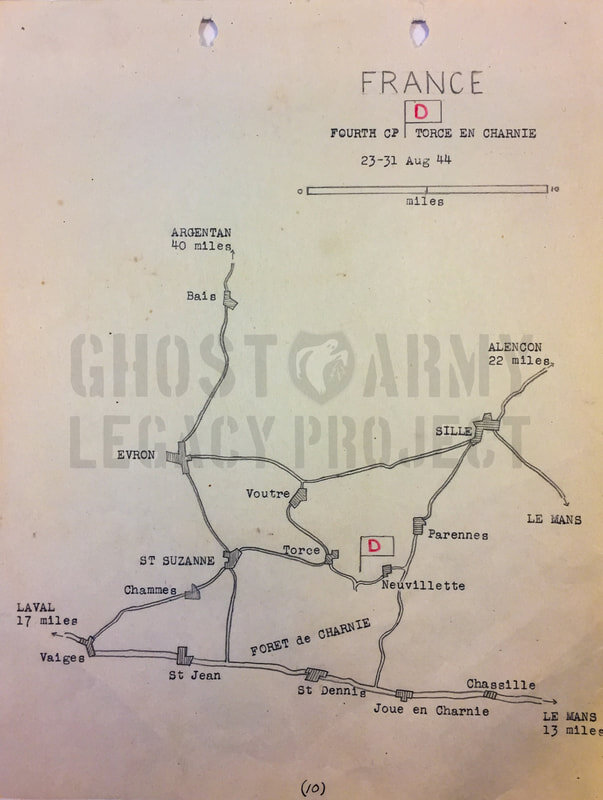 On 31 August, Col Reeder and four of his staff raced 210 miles east to the CP of THIRD ARMY near Troyes. They were called up to help in the design of the most grandiose deception job ever considered. For a while it looked like the 23rd was going to be pitted against the whole German NINETEENTH ARMY – single-handed.

Twelfth Army Group at this time was driving straight at Germany with two armies abreast: the FIRST on the left; the THIRD on the right. It was planned to persuade the enemy G-2 that the main allied effort would now be against the Pas de Calais (V-1 sites) area with a secondary assault at Dijon to link up with the U.S. SEVENTH army moving north from the Mediterranean. Meanwhile, the American Armies would actually continue rolling toward the Reich: the FIRST in the direction of Liege; the THIRD in the direction of METZ.

The 23rd was to be involved only in the secondary assault. It was supposed to portray a strong armored force moving southwards from Sens with the ultimate objective of seizing Dijon; sealing the Belfort gap; and arresting the German NINETEENTH ARMY. The Germans had about five divisions, one of them Panzer, and were withdrawing in good order. The deceptive columns of spoof radio, sonic and special effects would probably have been reinforced by some real combat strength.

On 1 Sept, Col Maddox, THIRD ARMY G-3, turned down the plan. He stated that it was too late to implement the ruse because real troops had already pushed so far towards Germany that the enemy could no longer be deceived as to allied intentions. The 23rd should have been ordered into position not later than 28-29 Aug.