Halfway to Doncourt, the Signal Company was notified that it was to engage in another operation. This one was called KODAK (22-23 December) and was thusly christened by Lt. Col. Ralph M. Ingersoll (editor-on-leave from the newspaper, PM). He chose this name because he considered the operation an attempt to confuse the enemy by presenting them a "double exposure" of our order of battle. But the 23rd had barely enough time to load the camera before it was all over. KODAK only last 24 hours.

The 23rd mission was to show by spoof radio alone, the presence of the 80th Infantry and 4th Armored Divisions slightly northeast of Luxembourg and in position to forestall any German plans of extending their counterattack southwest through Echternach. At the same time the real 80th was preparing to jump off due north of Luxembourg and the 4th Armored was getting ready to roll up from Arlon to effect its historical juncture with the 101st Airborne in Bastogne.

Operation KODAK was a big (29 sets) loose radio show. The desired result may have been achieved because plenty of enticingly insecure traffic was put on the air. The brevity of the operation and the confused situation made it impractical to produce a polished reproduction of the 4th or 80th. Therefore, no sonic, dummies or special effects were used. 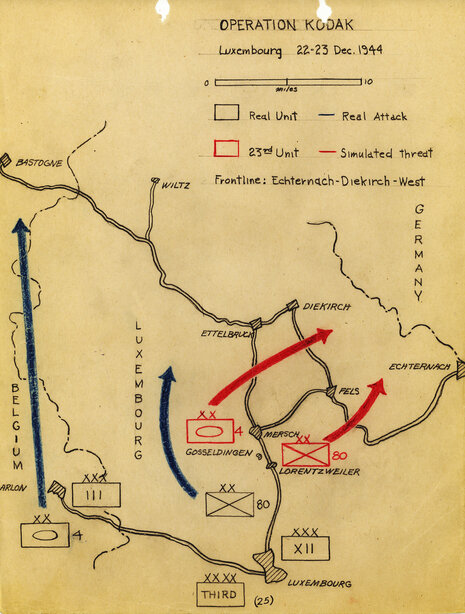