Soon preparations were begun for overseas movement. On 10 April 1944, the advance party left by plane for England. This group of seven: Col. Reeder; Lt. Cols John W. Mayo, FA O; James W. Snee, Armd O; Clifford G. Simenson, S-3; Majors Joseph P. Kelly, S-2; Charles H. Yocum, Sig O; David H. Bridges, S-4; hoped to find in the ETO answers to many problems unsolvable in the States. The S-2 was particularly interested in enemy intelligence activities. He knew that the 23rd must be completely familiar with all the sources of enemy intelligence before it could begin to confuse or neutralize them. The Signal Officer tried to secure information under three general headings: (1) The power and range of German signal intelligence, (2) Signal deception attempted by the British and Americans previous to D-Day. (3) Radio set-up and signal policy of American corps and divisions already in the ETO. Similarly, the rest of the party checked on their specialties. Unfortunately, the trip was not too rewarding. The officers were hampered by the high classification of their subject; the U.K. was bustling with invasion preparation and, as usual, there was little or no information on the type of deception the 23rd intended to practice.

The main body entrained for Camp Kilmer, New Jersey, 21 April. Here they went through the usual POM tests, lectures, demonstrations, and eight-hour passes to New York. On the night of 2 May, they boarded the USS HENRY GIBBONS in New York harbor. There was no band or cheering. The troops filed aboard quietly. The GIBBONS was a good clean ship. She was modeled after the American President luxury liners and rode well. The officer accommodations were superb and the men were stacked comfortably like sardines. Lt Co. Frederick E. Day, AA O, assumed command of all troops aboard and Major David Haviland was appointed Adjutant.

The trip across was uneventful. After a few days everyone got used to the magnificent sight of our big convoy and settled down to poker. Boat drills were held regularly, but enemy submarines fired no torpedoes into us. There were, however, a few alerts and bursting depth charges wakened us occasionally. The business of morale was taken over by T/4 Alfred G. Berry pf the Sig Co Sp and 1st Sgt. Jerry Gluckin, A Co 603rd Engr Cam Bn Sp. The former ran the library and public address system with great success. The latter lent his tremendous personality to the nightly deck shows. The chaplain objected to Gluckin’s language and sulked in his cabin during the performances. 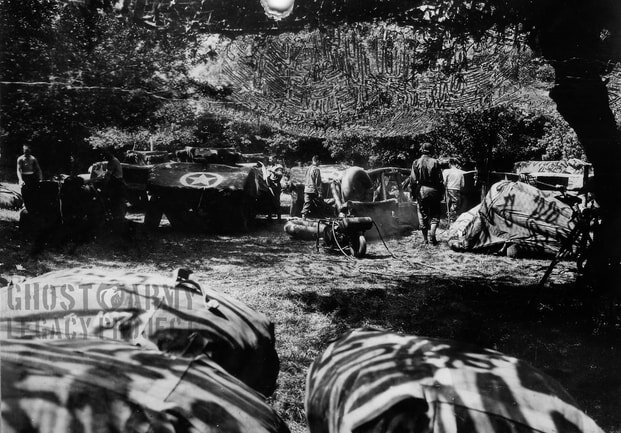 ​The factory section of 603rd Engineers Camouflage in an orchard in Normandy. Here dummy items were tested, repaired and new ones designed. Note pump in foreground which made inflation simple. 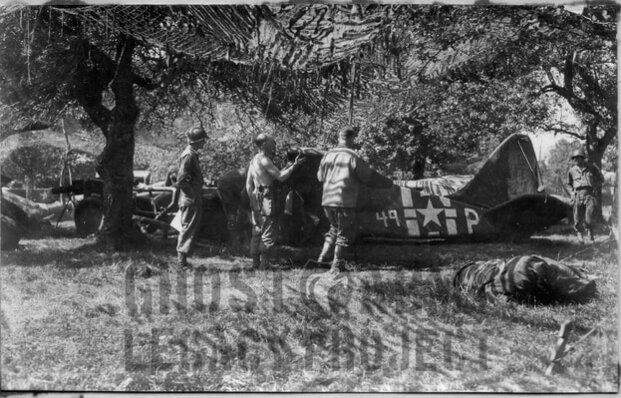 603rd Factory Section checking a dummy L-4. The American rubber equipment was superb, but expensive. Each item was carried in its own bag made of heavy canvas. 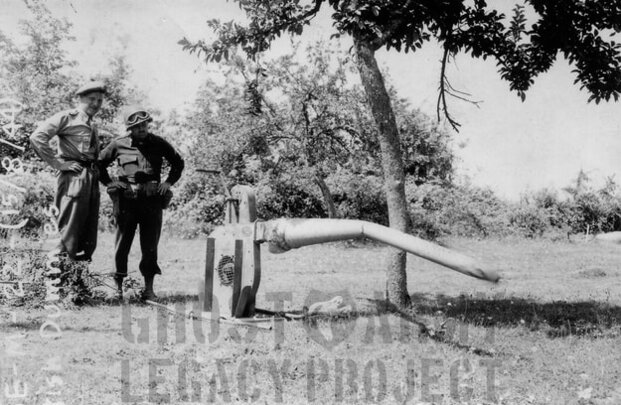 An American camouflage officer looks critically at a British army pump. The British material could not stand the beating that the US structure could.