The next operation saw continued improvement in the technique of deception but a worsening in the employment of it. The locale was the great port of Brest; the time, 20-27 August; the general mission: to bluff the surrender of the city by augmenting the U.S. show of force around it. The 6th Armored Division, which had originally sliced through the Brittany Peninsula to Brest had withdrawn. The VIII Corps with three infantry division: 2nd, 8th and 29th was assigned the job of taking the fortress, The 23rd Hq Sp Trs was given the specific job of enlarging the Corps by the addition of two phony tank battalions of the 6th Armored Division and replacing one of the real 2nd Inf Div field artillery battalions with three "flash" batteries. 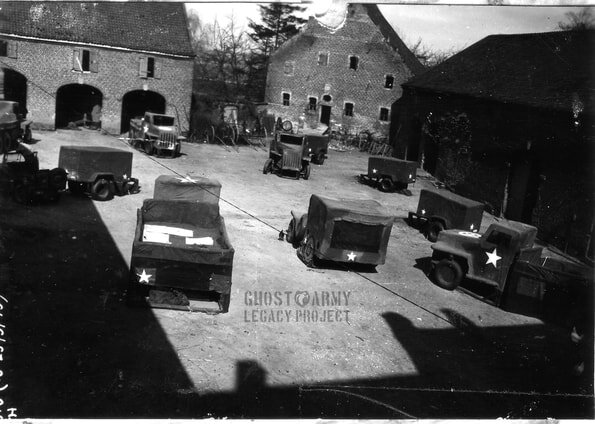 Simulated supply dump in a courtyard near Anrath, Germany, in Operation VIERSEN (18-24 Mar 1945). Every vehicle in sight is a dummy except the jeep on the left. The decoys were moved around at night. 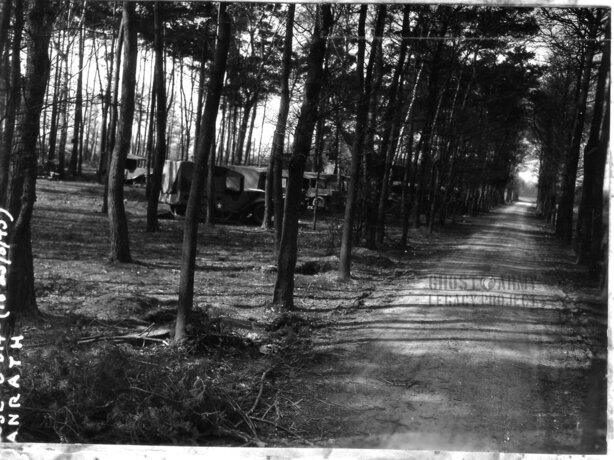 ​A divisional "motor pool" in Operation VIERSEN. All these vehicles are dummies. Such an installation required careful guard and sweeping area of civilians. 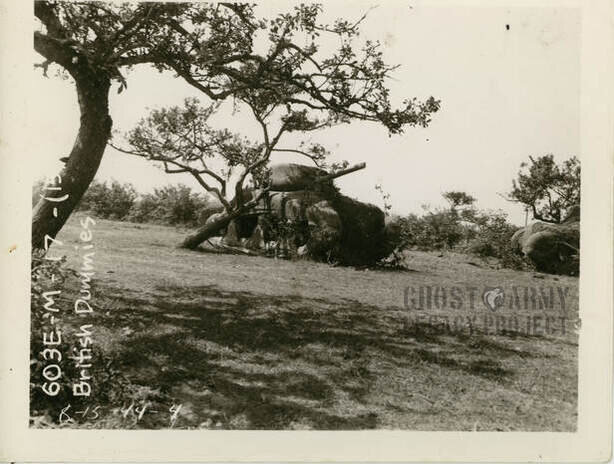 ​A British sister unit exhibits some of its inflated tanks. These were admirable reproductions but could not be assembled as quickly as the U.S. models.

It was reasoned that since the Germans had been giving up fairly readily, they might capitulate again if faced by a sizeable corps. But the estimate of the enemy strength and determination was way off. Instead of 21,000 troops, Von Ramcke had 38,000 and instead of surrendering, he fought hard for 27 days.

The BREST task force left Le Fremondre on 20 August. It closed in a bivouac area near Lesneven the next day after a trip of 190 miles. The unit then divided into three deceptive forces: X, Y, and Z but maintained a base camp near Lesneven. The notional 15th Tank Battalion was played by "X" in the area of the 9th Regt 2nd Inf Div. The notional 69th Tank Battalion was played by "Z" in the area of the 23rd Regt 29th Inf Div. Both "X" and "Z" had tank companies of the real 709th Tank Battalion to act as a nucleus for their notional tank battalions. The rest of the picture was filled in by dummies, spoof radio, special effects and sonic. The deception was superb but, unhappily, "X" deceived the enemy into believing that the tanks were going to attack from exactly where they did. The S-2 of the 9th Inf Regt reported that the enemy installed from 20 to 50 more anti-tank guns after the "X" operation, When he VIII Corps finally attacked on 25 August, Co D, 709th Tank Battalion met very heavy resistance in front of the "X" area prior to crossing the line of departure.

Deception experts were agreed that this was poor use of deception, In that Co D, 709th Tank Battalion was placed opposite the best ridge line for a tank attack into Brest, it would have been much wiser to: (1) have employed deception elsewhere to draw enemy antitank defenses away from this ridge line, or (2) have cancelled the attack of Co D, 709th.

Operation Brest was notable for the 23rd ‘s first employment of sonic and artillery "flash" deception. Five sonic half-tracks were used by each of the two notional tank battalions. On the nights of 23, 24 and 25 Aug, within 500 yards of the enemy, they projected the noises of tanks approaching, "harboring" and withdrawing. Friendly troops a mile away were firmly convinced that tanks were assembling in heir vicinity. After the fall of Brest, 27 Sept, Von Ramcke said that he had held out pretty well against three infantry and one armored division.

The dummy flash batteries were located 600-800 yards in front of the 37th Field Artillery Battalion (105 How). They were installed to draw off enemy counterbattery fire. The phantom artillery operated for three nights (23-25 Aug) and received some 20-25 rounds of enemy fire. The real battalion received none up to the time the 23rd "X" force was withdrawn.

After the BREST operation, Col. Cyrus H. Searcy, VIII Corps Chief of Staff, wrote that although deception had achieved "limited apparent results," it was not through any fault of the 23rd. He stated that deception around Brest had been adversely affected by: "(1) the complete lack of enemy aerial observation, (2) the determined defensive tactics already decided upon by Von Ramcke, and (3) the prior appearance of strong armored elements in the Brest area." But, he added, "the work of these deception units is complete, thorough and correct to the smallest detail. It is believed that units of this type are of considerable value to the Army."

Col. Searcy might also have mentioned the risks involved in the use of deception and the extreme urgency of coordinating it with the combat plans. In addition to the spotlighting the attack of Co D, 709th Tank Battalion, the 23rd nearly gave away the jump-off time of the 29th Inf Div on the night 24-25 Aug. At the last minute, a loud sonic "program" was cancelled because it came 15 minutes before the infantry zero hour and would certainly have alerted the enemy. 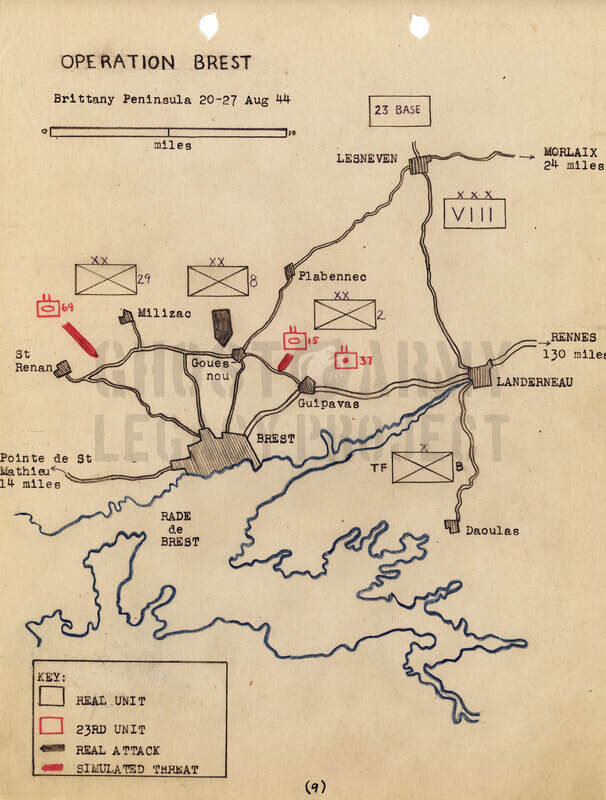