Operation ELSENBORN (3-12 November), as it is called, revolved around a complicated series of divisional moves. First, the 28th Infantry left Elsenborn barracks to replace the 9th Infantry for the abortive push toward the Roer River dams. The 9th Infantry then came to Elsenborn for a rest. After the 9th had caught its breath, it planned to relieve the 4th Infantry, which in turn was going up to the Hurtgen Forest to puts its strong back behind the 28th’s drive. The Elsenborn sector was under V Corps. The Roer River came under VII Corps. The 23rd’s objective was to cover the northward movement of the 4th Infantry Division by simulating the division (less one RCT) in the rest camp at Elsenborn barracks.

Since the 23rd was involved in two other simultaneous jobs, only one third of the command took part in ELSENBORN. No dummies or sonic were used. It was purely a radio and special effects show. 23rd radios began to infiltrate into the 4th Infantry nets just as in Operation WILTZ while the 4th was still holding part of the front. For over a week, the 23rd radios and operators handled all of the 4th’s transmissions. It was ample time for the 23rd radios to become identified as the 4th.

When the 9th Infantry was resting at Elsenborn it was instructed by V Corps (prompted by the 23rd) to take a three-day radio exercise – otherwise, its radios would naturally have been silent. This established a precedent and enabled the phony 4th to take the same Corps-directed exercise. Every afternoon from 8-11 November, 23rd radios, which had been spotted as the 4th Infantry by the German Signal Intelligence, blared forth from Elsenborn. One hundred operators and 22 transmitters were engaged in this deception.

The rest of the play was filled out by the Special Effects section whose road signs were especially effective. As far as the U.S. Army was concerned, everyone thought the 4th was resting in Elsenborn barracks – even officers of the real division were sucked into the phony CP and stared blankly around at the unfamiliar faces. The first snow of 1944 made vehicular movement difficult but 4-X bumpers and MPs were spread liberally around the neighborhood. 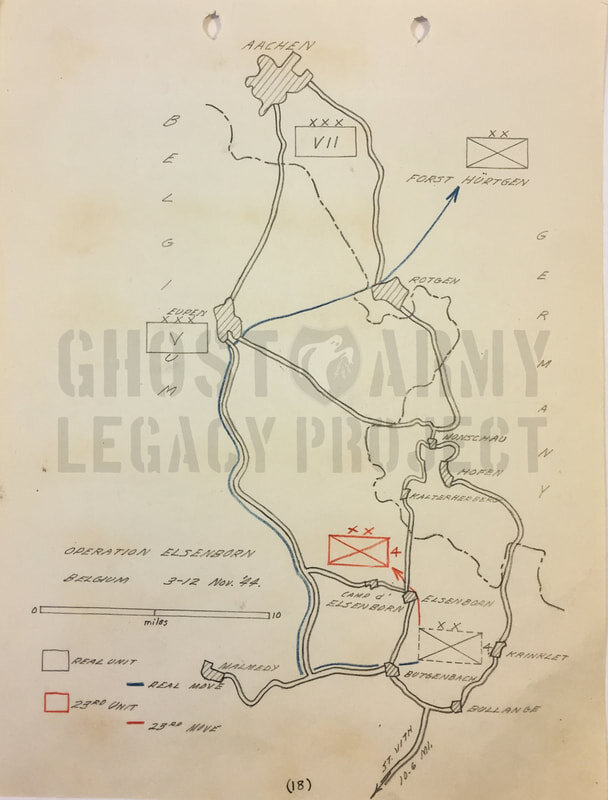 This operation was especially notable for the cooperation given by both V Corps and the 4th Infantry. It was a model in this respect. The division signal section made the 23rd radio infiltration very easy and originated, sustaining traffic in order to keep the nets alive. Before moving, the division blacked out thoroughly by erasing all visual evidences and then infiltrated north on secondary roads at night. V Corps, too, did everything that the 23rd thought necessary to make ELSENBORN a success. And when the 4th finally jumped off into the terrible woods of Hurtgen, it is said that the enemy was surprised by their presence. In fact, a captured German overlay was supposed to have placed them in Elsenborn.