On 25 September, the entire 23rd reassembled in Luxembourg City. At that time, even the worst pessimist did not predict that the headquarters would remain there for nearly seven months. It was not such a bad city. In fact, the quarters were excellent but the forward motion was missing and the prospect of a stalemate was most depressing. The staff first seized the spacious German Legation but was subsequently ranked out of it and down to the Italian Legation. This building was not as roomy but the china was gilt-edged and the wine glasses rang like bells. Mme Nestgen, a splendid cook, was engaged together with a fireman and two upstairs maids. Headquarters Company and the 3132nd were billeted in the Hollerich School and the Engineers and Signal Company took over a big seminary full of atrocious Nazi murals. It began to look like the 23rd was bedding down for the winter.

About a week later, the 23rd was called on again. As the front was reshuffled and U.S. striking power moved north, the 23rd could be employed to advantage. In this case, the 5th Armored Division, which liberated Luxembourg early in September, was being pulled 60 miles north to the area around Malmedy, Belgium. In Operation WILTZ 4-10 October, the 23rd attempted to "cover" the movement of this division. 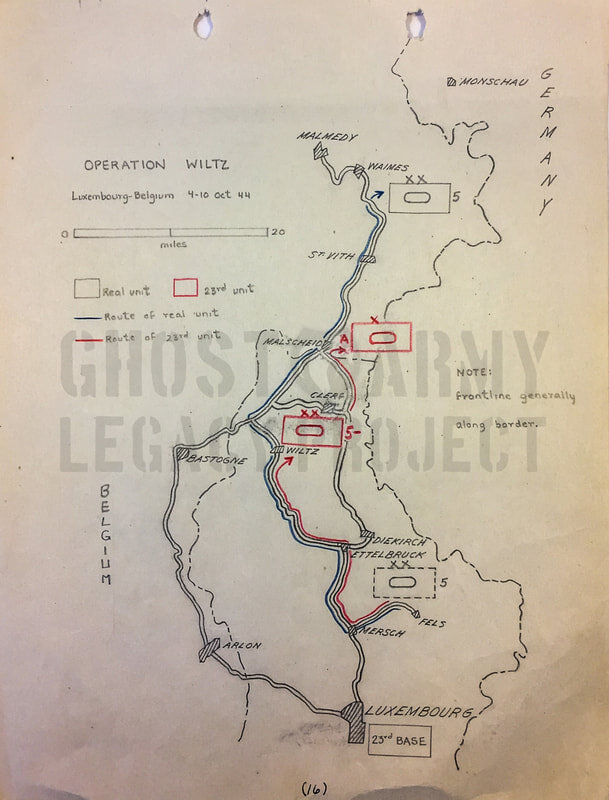 The original plan was to cover the 5th Armored completely. That is to say: permit the entire division to rumble 60 miles undetected and persuade the German G-2 that it was still in the same old area and had never moved at all. In order to have done this, it would have been necessary for the division to "blackout" thoroughly (remove all visual means of identification) and go north by infiltration at night. Unfortunately, it was impossible to secure such camouflage cooperation at this time. The division did remove its bumper markings but 5th Armored shoulder patches were still obvious and the huge, clanking columns blocked the roads in full daylight.

So the 23rd decided to ride with the punch and admit that the 5th Armored had moved but not as far as it actually had. The 23rd notional CCA set up in the vicinity of Malscheid, Belgium, which was about 20 miles less north than the real CCA. The notional CCB and Div Hq established their CPs near Wiltz, Luxembourg, or about 35 miles less north than their real counterparts.

In Operation Wiltz, deception relied mainly on spook radio and special effects. No dummies and very little sonic were used. The signal picture employed 17 radios over an area of 1,000 square miles. This cover operation was notable for an advance in deceptive radio technique. Since the 5th Armored radios were active in the old area, the 23rd radios began "infiltrating" into the real nets two days before the actual operation began. This meant that 23rd radios had enough time to be briefed thoroughly by the real 5th Armored operators and gradually take over the operation of the nets. The transition from real to spook was therefore smooth and the enemy radio intelligence should have had a hard time detecting it. Naturally, the real 5th Armored moved north under radio silence while the 23rd used its call signs, frequencies, cryptographic systems and distinctive traits.

The big lesson relearned in WILTZ was the absolute necessity for coordinating deceptive efforts with the actions of the covered unit. Because of the unconcealed movement of the 5th Armored Division, the chances for success of this operation were greatly endangered. (As the 2nd Armored did in ELEPHANT back in July.)