On 15 November, the 23rd was directed to prepare and submit to 12th Army Group a deception plan with the objective of containing the present German strength on the VIII Corps front until 30 December. This plan was called Operation KOBLENZ because it intended to poise a notional attack aimed down the Moiselle Valley toward Koblenz. It was to have been executed in two phases but only the first one was completed (6-14 December). The second part was interrupted by Operation GRIEF (16 December), the Ardennes counter-offensive of Field Marshal Gerd Von Runstedt. 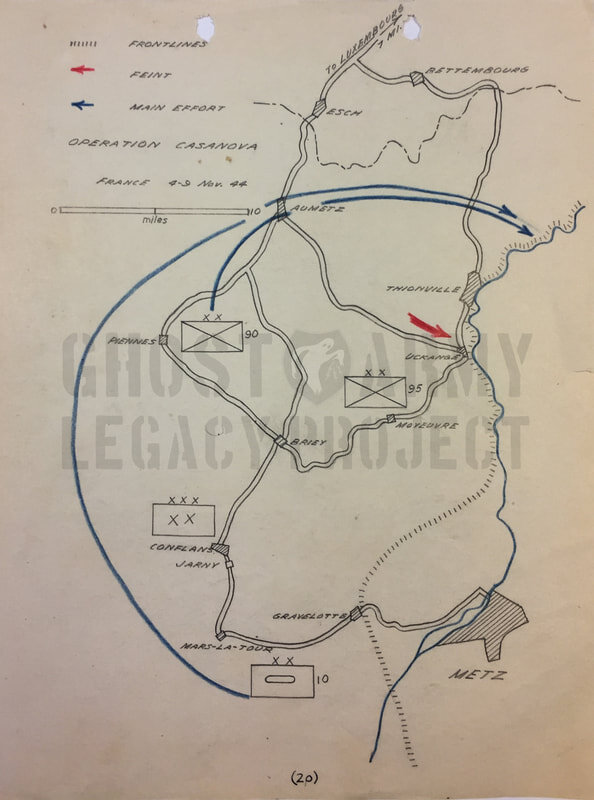 Operation KOBLENZ was beautifully organized in everything but the G-2 point of view. While the 23rd thought they were waving a red flag at a sucking calf, a Nazi bull was preparing to charge. Instead of Luxembourg being the dullest sector with school troops and resting veterans, it soon hit the headlines of the world when two raging Panzer Armies drove into the "bulge." This is what was so embarrassing.

The 23rd did not handle Operation KOBLENZ alone. It acted in a supervisory capacity for VIII Corps and, of course, supplied its skilled deceptive units. But the best part of the operation was the fact that Corps actually drew up plans to attack through Trier to Koblenz. Preliminary air bombardment was to have been started 9 December and last for five days. Corps artillery moved some units into support position using assumed names. Real infantry patrolling was to have been intensified and on 13 December a feint made by the 28th Infantry Division. Engineer and Ordnance dumps were to have moved as if in a "buildup." Propaganda, press and counter-agents were to spread the word. The 23rd would supply an extra "division."

The guise of the 23rd was changed four times: from the 9th to the 78th to the 106th to the 75th. Each time a name was decided upon, the operation was postponed and the real division appeared in person somewhere else along the front. The 9th stayed around Elsenborn; the 78th went into the Hurtgen Forest; and the ill-fated 106th took over St. Vith. The 75th was finally chosen because it was moving from England to France and the enemy probably did not know its exact location. A 23rd Liaison Officer was, therefore, flown to England to "type" the 75th (i.e., secure SOIs, itinerary, shoulder patches and specifications for other special effects.)

On 7 December, Lt. Col Schroeder of the 23rd, acting as billeting officer for the "75th" Infantry, reported to the Town Major (sic) and arranged for division billets east and northeast of Luxembourg. (Sector then held by the 4th Infantry Division.) On this same date, 23rd "CT" and unit commanders reconnoitered their assigned areas preparatory to bringing in troops, The phony 75th moved in over a three-day period beginning 9 December. This was accomplished by infiltrating unmarked 23rd vehicles into a hidden transit area west of Arlon, Belgium, where signs, bumpers and insignia were supplied. The vehicles then moved out in "75th" convoys. These convoy movements were reported to German Signal Intelligence in SLIDEX (weakest of codes) by 23rd traffic control radios spotted along the way and as far back as Sedan. Traffic was augmented at night by use of sonic deception. 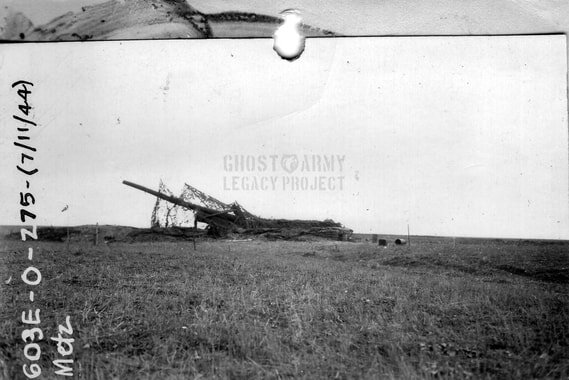 Pointed threateningly at Metz is a rubber 155 in Operation DALLAS (2-10 Nov 1944). Flash simulators were shot off nearby. 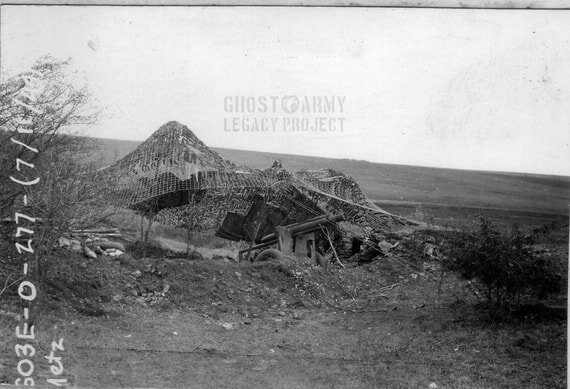 Dug in and camouflaged near Jarny, France, a decoy 105mm how. This item could be zipped from the bag, inflated and in position in less than 12 minutes. 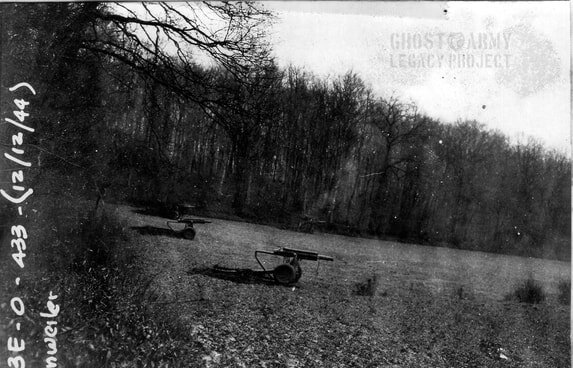 ​A battery of 105mm hows are drawn out of the woods east of Luxembourg for firing. Note the rubber tubing which was the basis for all the dummy construction. 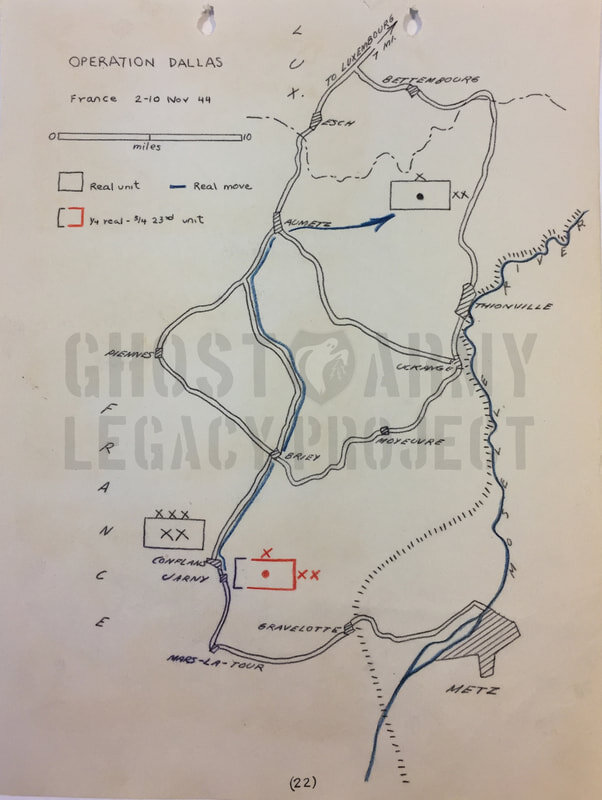