Paris was put OFF LIMITS and ON LIMITS so often that everyone in confusion visited it whenever possible. It was a great town. Architecturally it had not changed at all. The girls looked like delightful dolls especially when they whizzed past on bicycles with billowing skirts. They were in considerable contrast to the red-faced Norman farmer daughters. The Parisians were very happy to see us but on the surface did not look particularly maltreated. The thin-legged children were the most obvious products of war. Perfume and fineries were fairly easy to buy and the prices did not become terrible until later. Cigarettes, D-ration chocolate and K-ration cheese made welcome gifts. Many friends were made. While driving down the Champs Elysees with a jeep-load of fashionable civilians, one had a tendency to think that the war was over.

Far from it. While allied support was diverted to the First Airborne Army’s unsuccessful attempt to slice into Germany, the First U.S. Army was impaled on the Siegfried Line and the Third U.S. Army halted on the Moselle. On 14 September, the 23rd Headquarters returned to the war. This time it was to play Operation BETTEMBOURG (15-22 Sept), a purely defensive role, in southern Luxembourg for XX Corps.

Corps Headquarters was in a mud hole just west of Metz. It was attacking the fortress city with two divisions from a bridgehead to the south while the 90th Infantry contained it from the west. This left only part of the 3rd Cavalry Group to fill the 50-mile gap to the north. Actually, it was nearly 70 miles between the 90th CP and the nearest V Corps division. The 23rd, in the guise of the 6th Armored Division, was thrown into this hole. Its mission was first to draw enemy pressure away from the Metz area, and second to reinforce the 43rd Cavalry Squadron. Later, the second mission became more important than the first, however, after the Germans apparently reacted strongly to the ruse. Originally, the operation was scheduled to last not more than 60 hours, but as a hollow checkmate to the newly arrived German 36th Infantry Division, the 23rd was held in position for seven days – until it was "relieved" by the U.S. 83rd Infantry.

During this period the real 6th Armored was moving east from Lorient. CCB had already reached the XII Corps area around Nancy so the 23rd assumed it was spotted and did not attempt to portray it. Therefore, the show was limited to CCA, CCR and 6th Armored Division Headquarters. 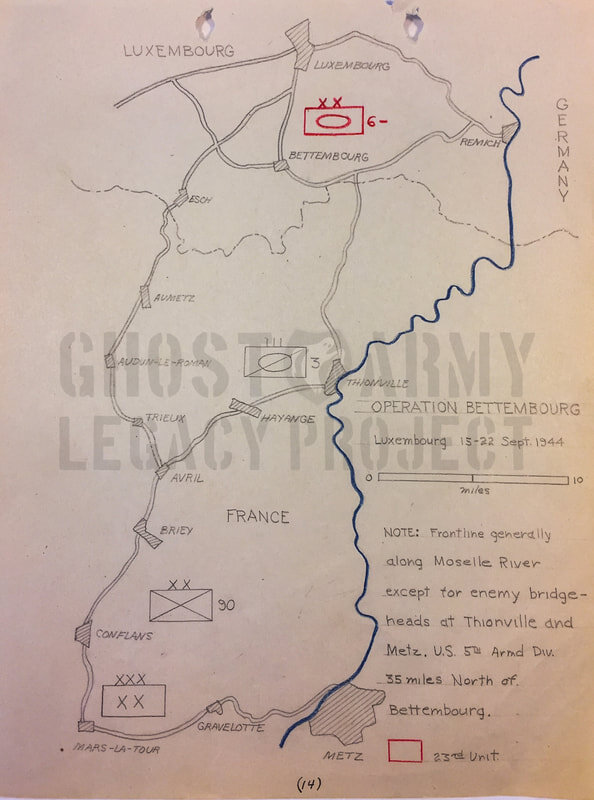 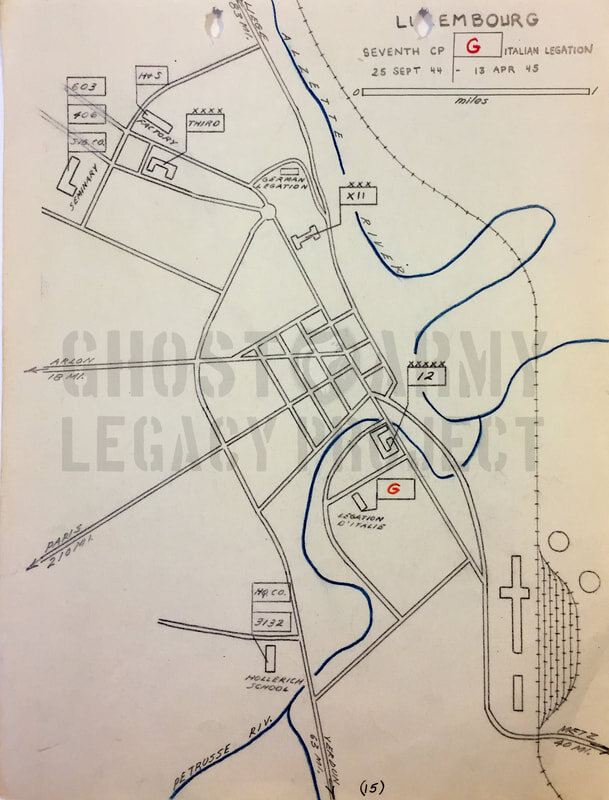 Four means of deception were employed: radio, dummies, sonic and special effects. The radio picture was considered the best to date. In involved 10 radios in five nets, three of which were real. Only 23 decoy items were emplaced because enemy aerial reconnaissance was nil and the danger of compromise by ground agents was high. The sonic company played the tanks in various movements for four nights. In these black moonless nights, the roaring columns were extremely realistic. During the day, the sonic half-tracks were used in Special Effects. Other visual measures included: shoulder patches, bumper markings, military police, vehicular activity (a platoon of light tanks was borrowed from the 43rd Cavalry Squadron), water points and a phony major general. A short history of the 6th Armored was given all the men and they were sent into nearby towns for church, showers and recreation. There was more than one shifty-eyed civilian observed photographing bumpers, taking notes and asking more than friendly questions.

Only half of the command was used in this operation. The rest of the unit stayed in St. Germain until 20 September and then moved up to Verdun. It was felt that this personnel could have been used to better advantage at Bettembourg and thereafter no major operation was performed at less than full strength. Despite this and the fact that XX Corps prolonged the operation longer than a ruse normally could be sustained, BETTEMBOURG is believed to have been a success. It might be held partially responsible for the German nickname for the real 6th Armored Division – the "Phantom Division."