The rest of the 23rd was lent to FIFTEENTH ARMY who, in turn, gave them to XXIII Corps to ride herd on 100,000 hungry, homeless, haunted Europeans. These wretched people were officially called Displaced Persons but they were really liberated slaves of Nazi Germany. They needed food, shelter, clothes, baths, orientation and transport back to their native lands. They also had to be organized, screened and counted.

The 23rd began "DP" work on 11 April in a dual capacity: (1) as actual camp managers and (2) as a DP staff section to XXIII Corps. Naturally, no one, except a man who had been caught in the Mississippi flood of 1937, had ever come close to experiencing such a job before. The Mississippi refugees all spoke English, however, and were comforted by a sympathetic countryside. The DPs were divided into 26 foreign nationalities – many who hated each other – and all were feared and despised by the native Germans.

Five swarming camps in the Saar-Palatinate were immediately taken over by 23rd units: Baumholder (406th), Trier (603rd), Bitburg (603rd), Wittlich (603rd) and Le Bach (3132nd). The 23rd staff took over the Hotel Hermes in Idar-Oberstein which was also the headquarters of XXIII Corps. Fortunately, Mme Nestgen was smuggled across the Luxembourg border so the cuisine at the Hermes continued to be as good as that at the Italian Legation. 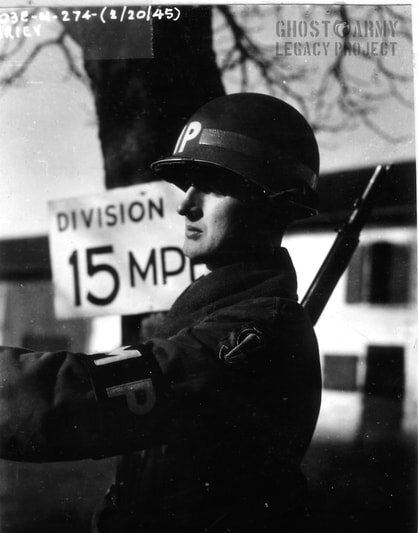 A phony MP of the 95th in Operation LANDONVILLE (28 Jan-2 Feb 45). These "MPs" were immaculately attired and coached. They obviously had to be quick-witted because they were asked many questions. 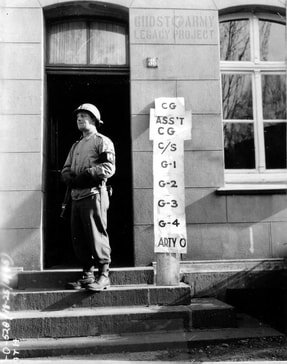 Two "MPs" of the 79th Inf. Div. in Operation VIERSEN (18-24 Mar 45) near Anrath, Germany. The CP signs were religiously duplicated and always helped to advertise the presence of the notional unit. Two-star "generals" in borrowed sedans kept the above guard snapping to attention. 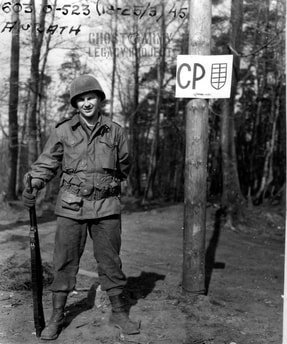