The 23rd's last deceptive effort of the War was fortunately the best. It was called VIERSEN (18-24 March) after a German city in the lower Rhine Valley North of Cologne. The objective as stated in the official report was: "As part of a NINTH U. S. ARMY deception plan, to deceive the enemy as to the actual Rhine River crossing area, strength of the crossing and time of crossing." The specific mission was: "To simulate the 30th and 79th Inf Divs in assembly areas in XIII Corps zone while the actual divisions were assembling in XVI Corps zone, and furnish advice on the Army cover plan as well as technique of deception to Commanding General, XIII Corps."

VIERSEN was conceived, planned and coordinated by Lt Col Merrick H. Truly, 23rd liaison officer who was attached to the G-3 section of NINTH ARMY.

The beauty of this operation lay in three facts: (1) the contribution of the 23rd was only a part of a giant spectacle involving practically all of the real NINTH ARMY; (2) the 23rd had reached its highest state of efficiency and all of its deceptive strength was employed; (3) from all evidences, the operation was a success.

Late in February, the NINTH and FIRST ARMIES had finally broken across the Roer River to the Rhine. By an audacious dash, the FIRST ARMY then crossed the Rhine at Remagen but the NINTH ARMY was held on the river line. The NINTH had three corps, from north to south: XVI, XIII and XIX. The latter two were heaviest with three infantry and one armored division apiece. (XIII had the 30th, 84th and 102nd Infantry plus the 5th Armored. The XIX had the 29th, 79th and 83rd Infantry plus the 2nd Armored). However the XVI zone was the most advantageous for a river crossing so this was the corps that the NINTH chose for the Rhine assault of 23 March. Two crack infantry divisions, therefore, were taken from the other two corps and added to XVI's 35th Infantry, 75th Infantry and 8th Armored Divisions.

NINTH ARMY made every effort to conceal the fact that the Rhine attack was to be made by XVI Corps. From north to south, this is what was done by each of the three corps to conceal or exaggerate their intentions:

XVI: the assault buildup was done under the most absolute security. Divisions (30th and 79th) coming into the zone moved in darkness and remained visually obliterated. Artillery positions and engineer parks were either hidden or camouflaged. Artillery registration was done by battery fire on normal harassing missions.

XIII: prepared all evidences for a river-crossing operation, the maximum effect to be attained about 1 April. Corps and Division Artilleries stepped up fire and spread out installations by the addition of rubber dummies from the 23rd. Corps Engineers established new parks and paraded with bridging equipment. Preparations were supplemented by dummy items, installed and maintained by personnel from the 84th Infantry and 504th Engineer Camouflage Battalion. TD emplacements were constructed along the front similar in nature and number to XVI Corps. The AA was built up with sixty-four 40 mm and sixteen 90mm rubber guns furnished by the 23rd. On some nights on small pretexts the AA sent up fierce demonstrations of firepower which rivaled their activity on the Normandy beaches. Infantry patrolling was intensified to a point 50% greater than that done by XVI Corps. The two divisions (30th and 79th) which had actually transferred to XVI Corps, were notionally assembled in the XIII Corps zone by the 23rd Hq Sp Trs. Two battalions of real infantry (from the 84th and 102nd) were attached to each of the phony divisions to help fill out the picture.

XIX: Artillery leaving the corps zone (to support the XVI) was required to leave positions intact and well camouflaged. TD emplacements similar to XVI and XIII were installed along the front. The 83rd Infantry Division dropped back to the Maas River area vacated by the 30th in the rear of XIII Corps.

The Ninth Army air support given by XXIX TAC flew reconnaissance over the XIII zone on the same scale as over the XVI. Army medical installations gave the impression that the attack would take place in XIII Corps zone. Only one evacuation hospital was installed in the forward part of XVI Corps zone. A spoof Army Traffic Control net operated by the 23rd brought radio attention to the XIII Corps by reporting large vehicular movements in that area.

The 23rd’s notional divisions were brought up from the old areas and displayed to the east and west of Viersen. All means of deception were employed: sonic, dummies, radio and special effects. Each "division" had nearly 100 extra rubber vehicles – including five liaison planes. Aerial photos of these installations showed a remarkably authentic layout.

The real troops engaged in the Rhine Crossing were delighted with the success of the cover operation. The 30th G-2 said the U.S. attack came as a "complete surprise to the enemy with a consequent saving of American lives." The 79th G-2 captured a German overlay of the American Order of Battle just prior to the attack. 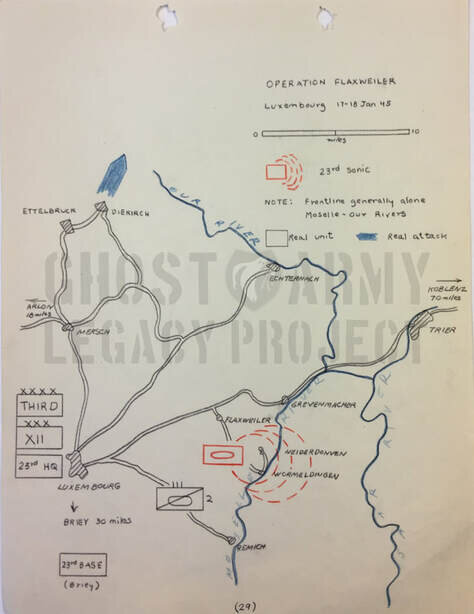 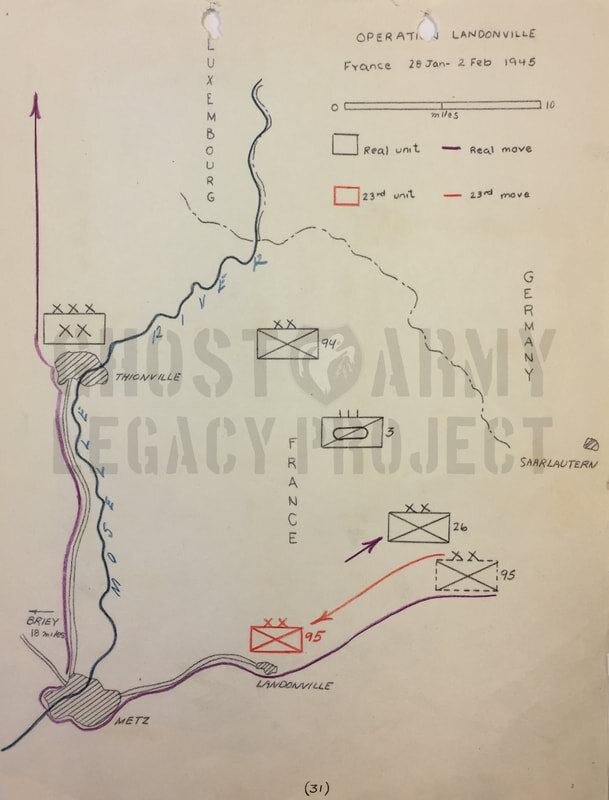 It had the 79th placed approximately where the 23rd had portrayed it and had lost the 30th altogether. The NINTH ARMY G-2 stated that the Germans expected the main allied effort to be made north of Wesel with a minor crossing opposite Krefeld. "There is no doubt," he said "that Operation VIERSEN materially assisted in deceiving the enemy with regard to the real dispositions and intentions of this Army."