Almost immediately the 23rd was called out to aid in a diversionary effort along the southern half of the Third Army front. Operation WHIPSAW (1-4 February) was really two simultaneous operations: one pure sonic and the other pure dummy. No special effects or spoof radio were used although the signal company furnished its usual straight communication. 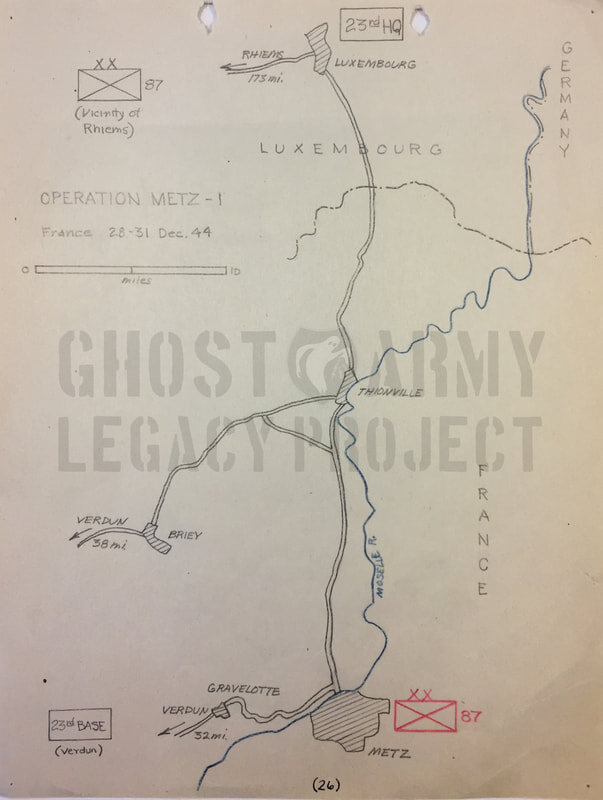 The sonic half of the job took place in the sector east of Luxembourg. The 3132nd had played there less than a month before in Operation FLAXWEILER. This time it projected the sound assembly of three tank battalions in Grevenmacher on the night of 1-2 February. The following night it did the same thing in Wormeldingen. During the third night it broadcast random tank movements around both areas and then returned to Briey.

Again the sonic demonstration was greatly assisted by real diversionary tactics of the 2nd Cavalry Group. The Germans reacted to the combined deceptive effort by a generous use of flares, increase in mortar and artillery fire and low-flying reconnaissance planes.

The decoy FA operation was not as profitable. This half of WHIPSAW centered around Saarlautern 30 miles south of the sonic show. Rubber dummies and camouflage nets were installed in positions formerly occupied by real U.S. batteries. No real guns or flashes were employed as in Operation DALLAS. It was just a static representation of two battalions of field artillery. Insofar as enemy aerial reconnaissance was nil, the results of this part of the operation are believed to be negligible.