From Metz, the 23rd raced north to take part in another cover job called Operation L’EGLISE (10-13 January). On the way up, some members dropped off in Briey, France, which was to be headquarters of the main body until April. They began to clean out the Caserne Guard Mobile in preparation for the return of the command. Due to some local politics it was difficult to turn on the plumbing. (The Briey Water Commissioner demanded a "pourbois" of two dozen bars of chocolate, a case of soap and 16 loaves of white bread. This was not given him so the plumbing was very erratic. 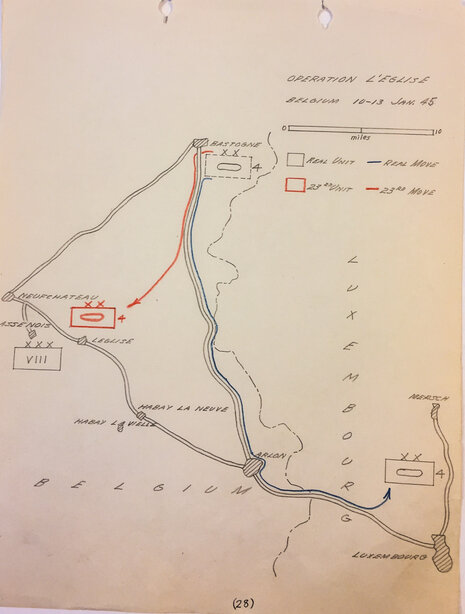 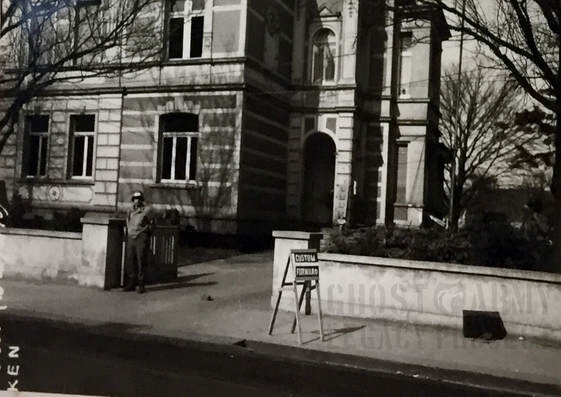 Code signs were carefully preserved in all operations. "Custom" was the code word for the 30th Inv Div and it was displayed with shoulder patches and bumper markings. If someone had tapped the wire, they would have heard "custom" code words on there too. 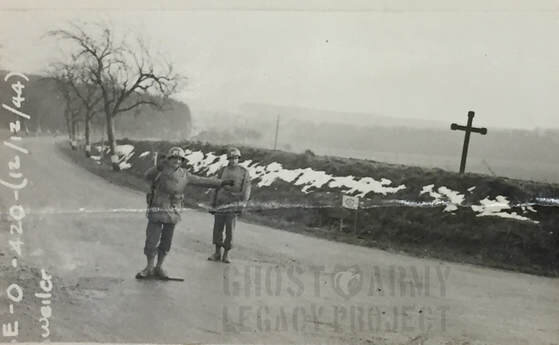 Even fake MPs have to keep their feet warm. Here two MPs from the 23rd Hq direct traffic, in Operation KOBLENZ. Note battalion road sign in the background.

At this time, the 4th Armored Division fighting with the 101st Airborne Division at Bastogne was being withdrawn. It was to be used in a new blow east of Luxembourg. The effectiveness of this attack was going to be increased by making this move under secret blackout and covering the departure with the 23rd.

By radio and special effects, the notional 4th Armored was brought back from Bastogne into VIII Corps reserve in the vicinity of L’Eglise, Belgium. No dummies or sonic were used. They really were not needed. The region was swarming with tanks from four armored divisions: 4th (blacked out). 6th, 10th and 11th. It was frightfully cold but the snow was lovelier than the finest Belgian lace. Everyone was snugly billeted. The fictional headquarters was especially comfortable in a home, which later turned out to belong to a notorious collaborator. He kept the fires high and served hot chocolate every night.

The 4th Armored did not attack, however, until March when it broke through to the Rhine. Until that time, it remained under a security blackout and its location was not even carried in the 12th Army Group G-3 periodic. The 23rd maintained its ruse for a few days and then returned to its new base camp in Briey. The planning staff officers went back to their Italian Legation in Luxembourg.