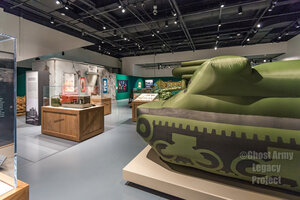 The Ghost Army exhibit created by the National World War II Museum opens at the Nevada Museum of Art on March 4. The exhibit, titled Ghost Army: The Combat Con Artists of World War II was created in consultation with the Ghost Army Legacy Project, and sponsored by E. L. Wiegand Foundation. The exhibit was most recently at the Illinois Holocaust Museum in Skokie, Illinois.

Ghost Army features inflatable military pieces, historical narrative text panels detailing unit operations, profiles of unit officers, archival photography and sketches and uniforms from unit officers. The exhibit presents exclusive, original content from The National WWII Museum archives along with a historical artifact collection curated and donated to the Museum by GALP. It debuted at The National WWII Museum in New Orleans in March 2020 before embarking on a national tour to share the story of the Ghost Army with communities across the country.

“This exhibition reveals an important aspect of the history of World War II, and showcases the creativity, ingenuity and bravery of these soldiers who will inspire Museum guests of all ages,” said Nevada Museum of Art CEO David B. Walker. “While the exhibition is on view the Museum will proudly offer free admission to active military members, their families, and veterans thanks to generous support from the E. L. Wiegand Foundation.”

In tandem with the exhibition, the Museum will also host a presentation by author and filmmaker Rick Beyer, whose book The Ghost Army of World War II: How One Top-Secret Unit Deceived the Enemy with Inflatable Tanks, Sound Effects and Other Audacious Fakery offers detailed insight into the 23rd Headquarters Special Troops and their creative deceptions on the battlefields of Europe that would earn them the Congressional Gold Medal. The presentation will happen on Thursday, March 16, at 6:00 p.m., and will cost $15 for General Admission and $10 for Museum Members.