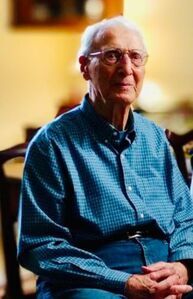 George Dramis, 97, Will Receive a Letter from President Biden

RALEIGH, NC – WWII Veteran George Dramis, 97, will be honored at a special ceremony Saturday at the Waltonwood Lake Boone assisted living community to mark the recent award of the Congressional Gold Medal to the Ghost Army, the secret WWII units that used creative deception to fool and distract the enemy on the battlefields of Europe.

Note: The public is welcome