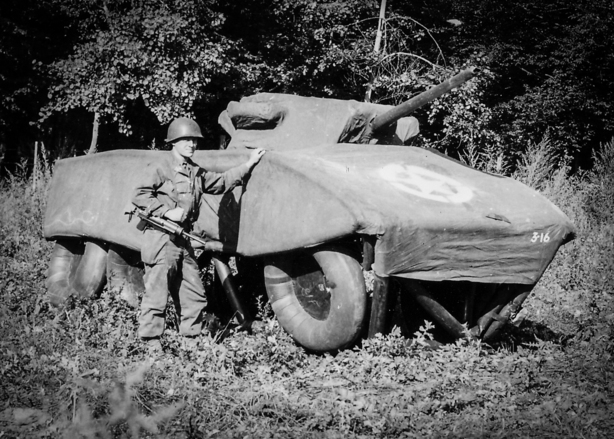 Recently awarded the Congressional Gold Medal, the unique and top-secret “Ghost Army” unit—comprised of 82 officers and 1,023 men—was the brainchild of Colonel Billy Harris and Major Ralph Ingersoll. Activated on January 20, 1944, under the command of Army veteran Colonel Harry L. Reeder, the group was capable of simulating two whole divisions (approximately 30,000 troops) by using visual, sonic and radio deception to fool German forces during the final year of World War II. Armed with nothing heavier than .50-caliber machine guns, the 23rd took part in 22 large-scale deceptions in Europe from Normandy to the Rhine River, the bulk of the unit arriving in England in May 1944, shortly before D-Day.

“I’m so excited that this exhibit is coming to the Illinois Holocaust Museum,” says Rick Beyer, Ghost Army Legacy Project President and Exhibit Consultant. “The Ghost Army soldiers are really the unsung heroes of WWII, who in total secrecy did so much to help bring down Nazi tyranny. They used creativity, performance, illusion and pure bravura to confound Hitler’s legions and help bring about Allied victory. What a great thing to remember and celebrate!”

“Ghost Army explores the bravery, heroics, and creativity of this first-of-its kind military unit,” said Kelley Szany, Vice President of Education and Exhibitions at Illinois Holocaust Museum. “Although their efforts were classified for over 50 years, the Ghost Army saved thousands of lives, and played an important part in liberating Europe from Nazi tyranny. The Museum is proud to highlight their vital contributions that went unrecognized following the war.”

Ghost Army features inflatable military pieces, historical narrative text panels detailing unit operations, profiles of unit officers, archival photography and sketches and uniforms from unit officers. The exhibit presents exclusive, original content from The National WWII Museum archives along with a historical artifact collection curated and donated to them by Beyer. The exhibit debuted at The National WWII Museum in New Orleans in March 2020 before embarking on a national tour to share the story of the Ghost Army with communities across the country.

Ghost Army: The Combat Con Artists of World War II will be on display through January 2, 2023. Throughout the exhibition’s run, the Museum will host a series of events, including book and author programs, Touch a Tank Day, Sip & Swing, and more.

The presentation at Illinois Holocaust Museum & Education Center is made possible by:
Supporters: