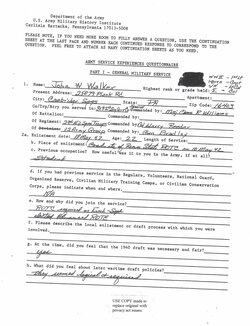 In 1968, the US Army used pension records to send out surveys to 9,000 veterans of the Spanish American War.  So began the Army's Veteran Survey Project.  This survey was filled out by John Walker, who was a Lieutenant in the 3132, the sonic deception arm of the 23rd Headquarters Special Troops. There is no date on the survey, but Walker was already a colonel in the Army Reserve when he filled it out, suggesting some time in the 1970s or 1980s.  Walker is generally laconic in his replies, but there are some gems in here.  Asked about his leave-taking from home, he replies:  "I had an understanding mother."  He has some pithy comments about leadership, enemy troops, and the Ghost Army's extended frontline service.  John Walker died in 2010 at age 90.