Katz Letters : Back in the USA 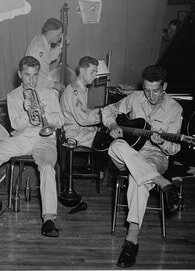 At the beginning of June, 1945, Ted realized he'd be leaving Germany soon. On July 3, 1945, Ted sent a Western Union telegram to Helen from Camp Patrick Henry in Virginia, telling her he was back in the States and would see her soon. On August 8, 1945 he was in Pine Camp in Watertown, NY. He was able to get a weekend past just a few days later to go visit his parents in Syracuse, about 70 miles away from Pine Camp. Now that Ted is in the States, he and Helen can talk on the phone occasionally. They consider getting married before his discharge, but ultimately they ended up getting married on December 2, 1945. 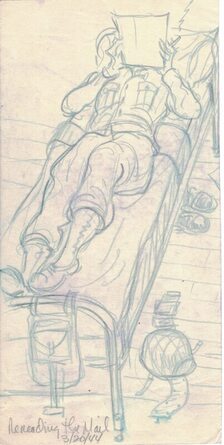 Of course, it’s too early to know what’s going to happen to us, but the events that have occurred since I saw you two days ago will have a tremendous effect. First the atom bomb and now the news which I’ve just heard of Russia’s declaration of war against Japan. It’ll all be over soon, Helen, - so you see there’s nothing to worry about. 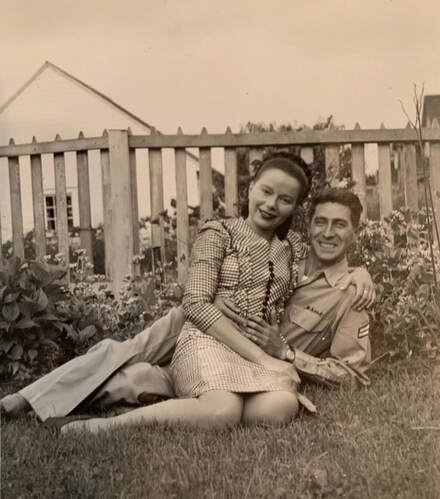 The radio has been going continually and we’re waiting for some definite news. It seems almost certain that the Japs will accept the surrender terms – there may be some more petty wrangling over the terms, but I’m sure that it’ll all be over in a few days, and then I’ll be waiting for the long awaited discharge. With the war ended – I don’t know what will happen to the outfit. It may be broken up and everyone sent to different camps or we may remain at Pine Camp. 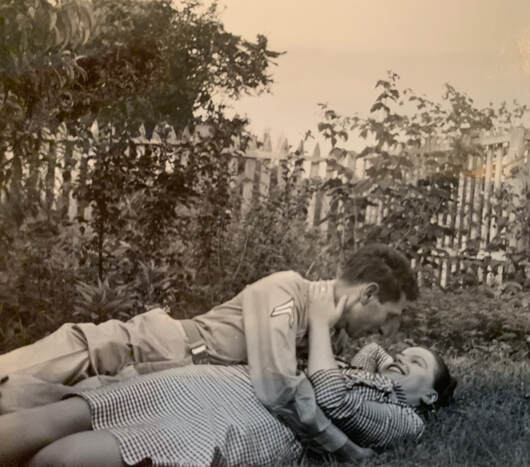 The events of the last week came so suddenly that I’m still in a slight state of confusion – I still find it hard to believe. But the current question is – what’s going to happen now? It is reasonably certain to assume that I won’t be leaving the States – right? We can mark this down as certain. Next – when do I get out of the Army? This is an unknown quantity – but, knowing the ways of the Army red tape and the tremendous problems involved we’ll take a compromise figure of 6 months with a month or so of leeway either way. 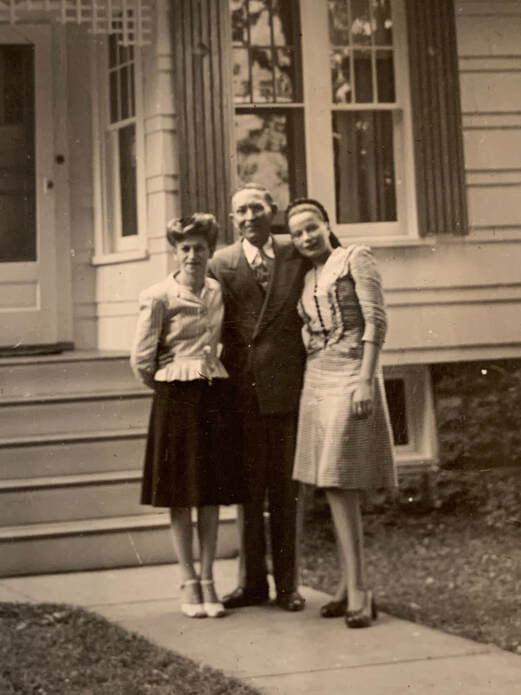 Today’s demobilization news is good. The lowering of the points necessary for discharge and the addition of accumulated points from V-E day give me a total of 72 points lacking only 8 more. However, before long the score will be lowered again and again and I’m sure it won’t be very long before my turn comes up. So you’d better get a hold of some books on “What every Bride should know” – or do you know everything already? 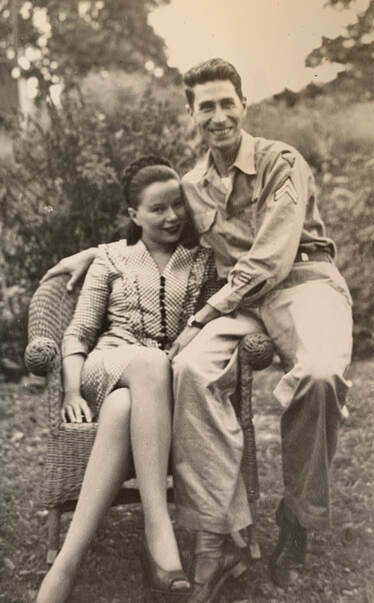 Though the outfit is being broken up – as yet, we are still on the secret list – but, one of the Signal men told the story (the whole story) to his home town newspaper while he was on the furlough and they spread it all over the front page. He’s going to be court martialled for it – but the story is out. 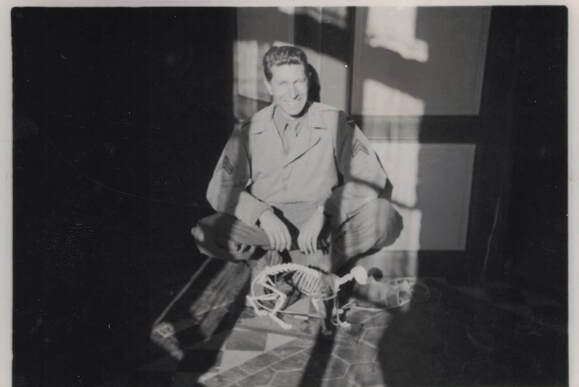 All of those pictures you will find enclosed were taken in Germany, after the end of the war. We’d just gotten our ETO jackets and were showing the Germans what the well-dressed soldier was wearing. In one of them, you will note my pet cat – a little thin perhaps – but even mice were scarce. 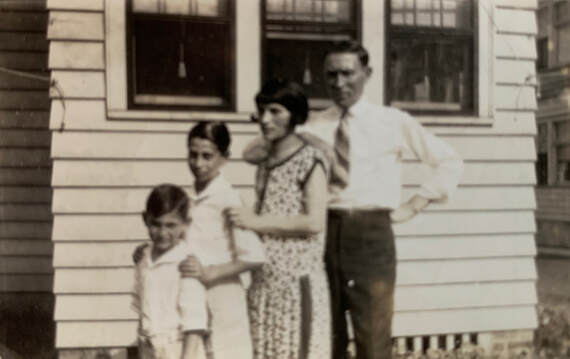 I know nothing of what awaits me at Ft. Myer. All I know is that it’s very close to Washington, and is supposed to be a very nice camp – the outfit, if I remember correctly, is the 17th Signal Service Co. – whatever that’s supposed to be – I don’t know what I’ll be doing – but I imagine that the work will be along the lines of what I’ve been doing – for why else would I be the only one from the company going there. 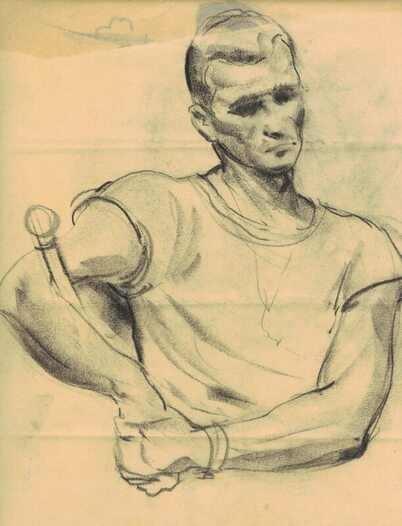 And, Helen, why didn’t you tell me that the place is full of “fruit-cakes” – I saw just thousands of the sweetest boys you ever saw in your life – Really! Whoops! The place is also full of very nice girls – but none like you, baby. In fact, this place is surrounded by women – civilians on one side, Wacs on the other, Marines to the side, and Waves on the other. 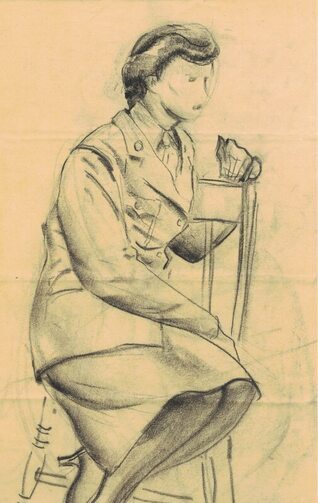 Last night I went to the movie on the Post here. When I went up there I found, as usual, a line waiting to get in. But the unusual thing was that it was a line of Wacs. For a moment I thought it was a Wac theater – but after questioning I learned that it was a regular theater – but the fact that there are so many Wacs here explains the preponderance of female personnel. Well, I got into line and was immediately accosted by 2 Wacs in front of me who began by offering me a stick of gum and the usual introductory questions. However, I was able to see through these supposed innocent queries and rebuffed them with cold replies. 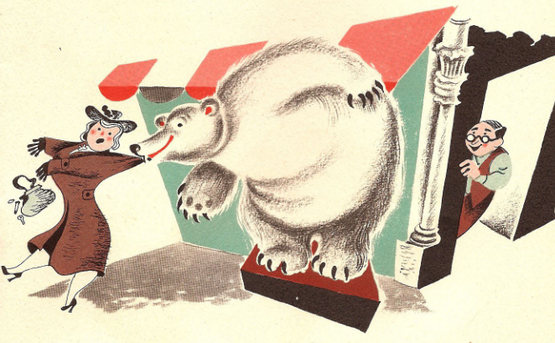 I was told last night that I would be a civilian probably this coming week sometime. I’m so excited I’m biting my toenails. The way it looks now, I’ll be transferred to the North Post on Tues and will be wearing the “duck” on Wednesday. 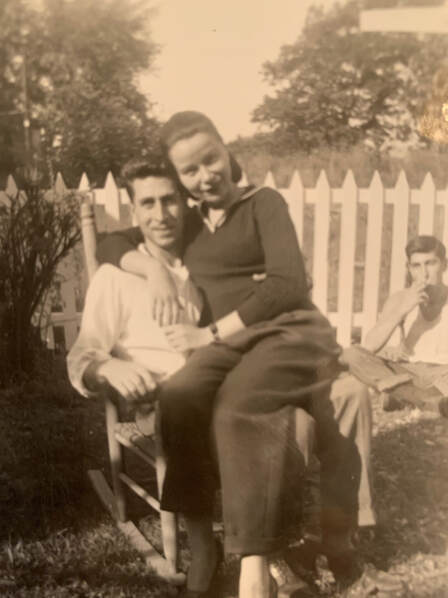 Of course, I’m not out of the Army yet – but I’ve got one foot out the gate at least. I’ve turned in all my excess clothing and all I have to do is take a physical exam, collect my pay and discharge papers and I’ll be on my way. I was supposed to turn in my field jacket but I “angled” my way out of it and it now reposes in my duffle bag along with the wool shirt you want – and some other things I can use for work clothes, etc. 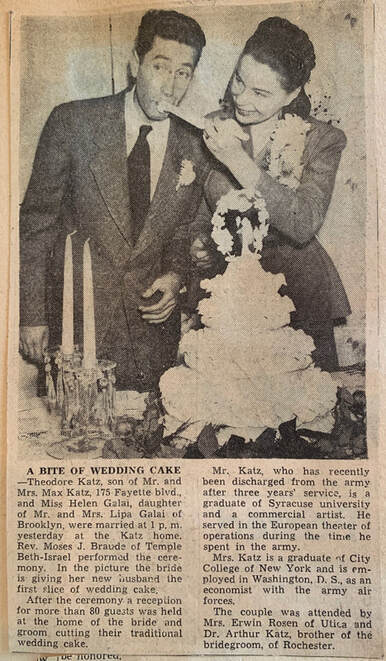 The important news of the day is one of truly magnificent proportions – the outfit has been declared non-essential and will be broken up. In other words, there will be no more 23rd HQ or 603d. All personnel will be transferred to other organizations where they will either wait for discharge or redeployment to the Pacific, depending on their point scores.