​Miller honored for service as member of Ghost Army during WWII 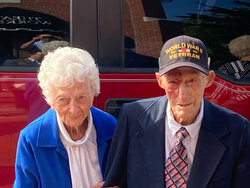 Owensboro resident Kenneth Miller, 98, was honored Saturday for his service during World War II as a member of the “Ghost Army,” officially known as the 23rd Headquarters Special Troops. The Ghost Army, a tactical deception unit, was recently awarded the Congressional Gold Medal. Miller is one of only 10 living members of the Ghost Army.