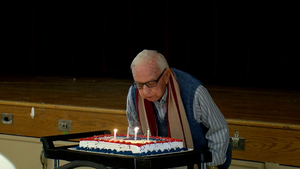 Thursday, Feb. 2 marks 100 trips around the sun for Tom Anderson, a WWII veteran and master of deception.

Anderson was part of the 23rd Headquarters Special Troops, better known as the "Ghost Army."

That unit of soldiers used wit and creativity to fool the Nazis, paving the way to victory more than 50 years ago.

"We had rubber tanks and rubber people and everything was an imitation," said Anderson. "We could draw the Germans any place we wanted them, and it worked."

One of Anderson's specific jobs was to make fake tracks using a bulldozer, creating the illusion of a moving tank.

Dave Skocik, of the Delaware Veterans Coalition, said with every year that passes, the number of living witnesses to this historical era grows smaller. Making Anderson all the more precious.

"We are here today to honor not only a World War II veteran and a member of the greatest generation, but a guy who is probably one of five or six in the world still alive," said Skocik. "They were granted a congressional gold medal for the work they did in World War II that really saved an estimated 100,000 lives."