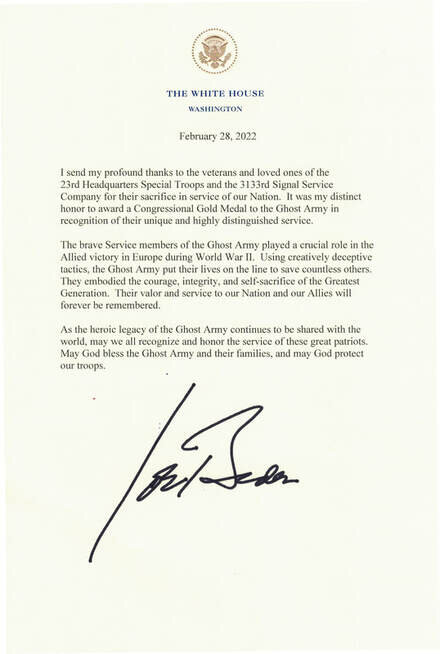 The Congressional Gold Medal is the highest distinction Congress can bestow.

The bill was sponsored by Senators Ed Markey (D-MA) and Susan Collins (R-Me) in the Senate, and Representatives Annie Kuster (D-NH) and Chris Stewart (R-UT) in the House.

Final pass of the bill capped a seven-year effort by the Ghost Army Legacy Project seeking recognition for this unit.•

Each Congressional Gold Medal is custom designed, and the design for this one is now being finalized. The Mint will produce one medal, 3" in diameter, which will be unveiled in a ceremony at the Capitol and presented to the Smithsonian. It is literally a gold medal - it contains about $30,000 of gold. The Mint will make bronze duplicates in several sizes that will be available for purchase.

“The United States is eternally grateful to the soldiers of the 23d Headquarters Special Troops and the 3133d Signal Service Company for their proficient use of innovative tactics during World War II, which saved lives and made significant contributions to the defeat of the Axis powers.”

​The Congressional Gold Medal is Congress's highest expression of national appreciation for distinguished achievements and contributions, by individuals or institutions. More than 170 medals have been awarded over the last 250 years. Here’s a little bit more about the medal’s history.

The Story of the Lobbying Effort

It took seven years to convince Congress to bestow its highest award on The Ghost Army. Here's the four-minute version:

Shortly after President Biden signed the bill, we celebrated with live program that brought together surviving Ghost Army veterans, family members, Senators, Representatives, and others.

​Here are some of our letters of support.