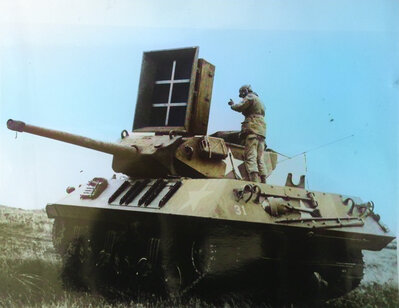 M-10 Tank Destroyer specially equipped for sonic deception. The gun is a dummy.

The 3133rd Signal Service Company was activated June 21, 1944, at the Army Experimental Station at Pine Camp, New York. Formed around a cadre of men from the 3132nd and officers at the camp, the 3133rd consisted of 10 officers and 192 men under the command of Major John Williams. Drawing from battlefield experiences of its sister unit serving with the 23rd Headquarters Special Troops, the 3133rd standardized equipment and increased the size of its security force. The 3133rd also placed its speakers inside M-10 Tank Destroyers nicknamed “slugs.” To make room for their electronics, the M-10s had their guns replaced with fake ones.

On March 1, 1945, the 3133rd sailed for Naples aboard the USS General Brooke and arrived after 14 days. It arrived just in time to take part in Operation Craftsman, the Allied assault on the Gothic Line, Germany’s last line of defense in Italy. The unit was joined by a platoon from 101st Royal Engineers, a British unit equipped with dummy rubber tanks.

The first phase of this was Operation Second Wind, a diversionary attack on the far eastern side of the Gothic line, near the coastal town of Massa. This was conducted by the 92nd Division, the only African American combat division in WWWII, reinforced by the 442nd Regimental Combat Team, composed of Japanese-American soldiers.

The 3133rd was called on to carry out a deception on the night of April 4-5 in support of this attack. The purpose of the deception was to suggest to the Germans that an armored buildup was occurring in the Serchio Valley, while the major thrust would be a few miles away along the coast. The 3133rd portrayed the 701st Tank Destroyer Battalion (an actual unit equipped with similar M-10 vehicles) with appropriate bumper-marking and signs.

One of the goals of this first deception mission was specifically to draw artillery fire, to reveal the location of enemy guns. According to a report done after the war, "the deception was considered successful, inasmuch as 24 of the 35 dummy tanks were knocked out by enemy fire."

Further evidence of success came after the war from the enemy commander. The main German force in the Serchio River Valley was the 148th Grenadier Division, commanded by General Maximillian Fretter-Pico. He was quoted as saying, “Initially, we were misled by the dummy armored division which you moved up the Serchio Valley from Bagni de Lucca to Barga on the night of 3rd and 4th April 1945. I delayed moving reserve units from the Serchio Valley to the coastal area for two days.”

The larger operation, Second Wind, was ultimately considered a success as well. American fighting units not only took Massa and moved several miles further, but they also forced German General Albert Kesslring to move a regiment from the 90th Panzer Grenadier Division from his reserve at Modena to the western end of the line, making it unavailable when the main offensive, Operation Craftsman, began.

After shifting east, the 3133rd ran a second deception as part of the main Craftsman assault on April 14-15, 1945, near Bologna. Here they simulated reinforcements joining the right flank of the American lines. The sonic company was split into three sonic platoons which conducted operations in three different river valleys. A third deception was canceled after German resistance collapsed. The 3133rd was in combat for only 19 days, earning a campaign star for participation in the Po Valley Campaign.

After fighting ceased, the men of the 3133rd were deployed where needed, some to the Yugoslavian border and Greece in 1946, before the unit disbanded. 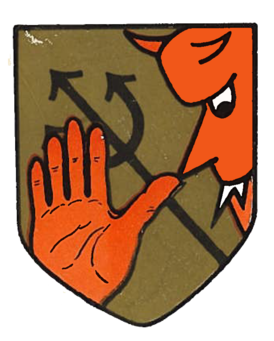 Unofficial insignia of the 3133